In retracing the main moments of the reflections of Pierre Lévy and Derrick de Kerckhove, two of the greatest exponents of the so-called cyberculture, the purpose of the essay is to compare their philosophical-political theses to evaluate their effective impact in the light of social and political transformations that have occurred over the last few decades. What we intend to show is how the differences between Lévy and de Kerckhove are due, in large part, to a different interpretation of the influence exerted by technologies on the human cognitive structure. Two political perspectives arise from these differences. Although starting from similar assumptions, they end up favoring the notion of participation in the first case, and that of transparency in the second one. However, in recent years, both Lévy and, more strongly, de Kerckhove have preferred to focus, unlike in the past, on the dangers associated with the use of ICTs, one coming, as an antidote to the threat of dataism, to talk about «Reflective collective intelligence» and the other one, relying on the concept of digital twin, to fear the disturbing scenario of «datacracy». 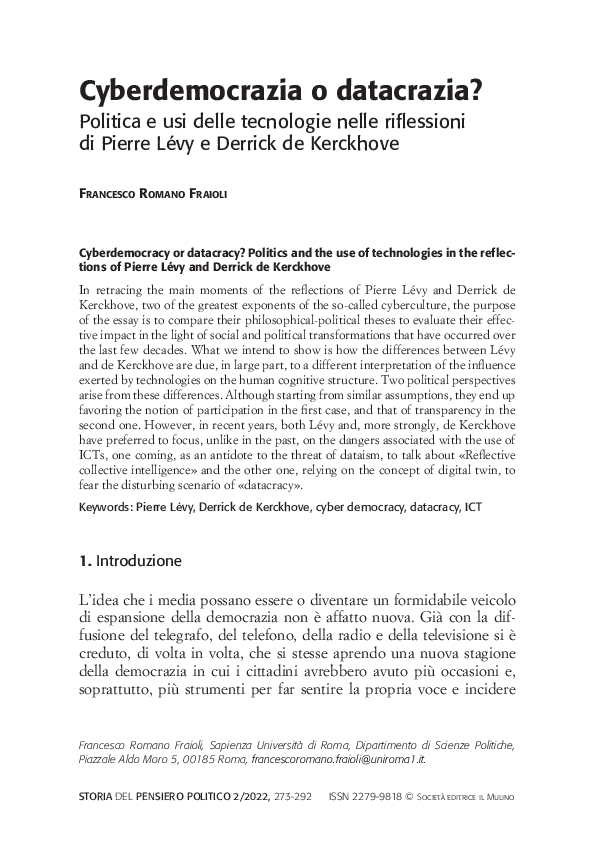