The essay analyzes the politicization of the concept of woman in Sarah Grimké’s political thought, turning it from a general signifier of oppression to the name of a universal possibility of liberation. In the first part, Grimké’s biblical exegesis is regarded as the doorway to a critique of the social and institutional articulation of the male domination. In the second part, her discourse is confronted with John Locke’s conception of the free individual, to show how the legal and moral analogy between slavery and the coverture allows her unveiling the patriarchal foundation of the American democracy. In the third part, Grimké’s call for abolitionist activism is regarded as the first step towards a collective – rather than individualistic – conception of emancipation, and an understanding of equality as the concrete practice that questions the distinction of the «appropriate spheres». Lastly, Grimké’s latest unpublished writings are read to highlight how theology and evolutionism are combined in the perspective of presenting woman as a divine agent, with the capacity of generating something new, which is not already subjected to the existing relations of domination. 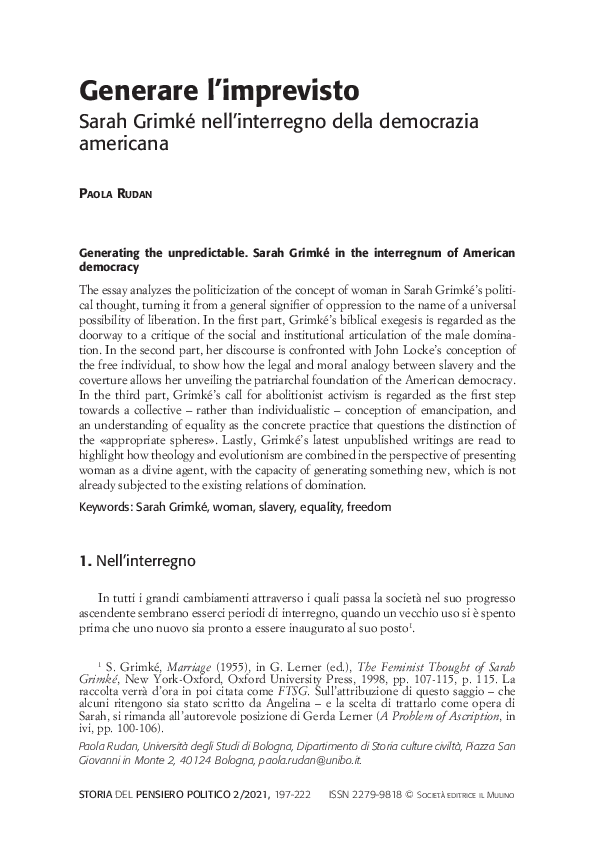