Over recent years, political and economic strategies in Italy have been characterized by new ways for intervention: not only the State as a supplier of public resources, often in a deficit situation, but also the State as a marketing initiatives promoter, inside the market, using private resources; the State as active part of agreements and contracts with private entities. In consideration of the high level of public debt and low growth perspectives, the Italian way identifies measures at the border between public and private law. Main examples deal with the subscription, by the Italian Treasury Ministry, of hybrid capitalization instruments (the so called Tremonti bonds); the debt moratorium agreement for small and medium enterprises towards credit system; the closed-end public-private fund in order to support the capitalization of small and medium enterprises; the «Fondo Strategico Italiano»; the «Banca del Mezzogiorno»; contractual devices for granting liquid assets to companies that supply Public Administration. The paper aims to give evidence of such fil rouge in the recent economic politics and proposes necessary changes in order to convert the new approach from temporary into structural, with reference both to the role of the public official in the context of the State who acts as promoter/ contractor and the juridical instruments that allow these ways of intervention. In this connection, there is a large use of private autonomy, in the form of contractual autonomy, for implementing public interests. Public orders are replaced by contracts in order to pursue targets of public relevance in the economic policy. Emblematic example is the experience of the Italian Competition Authority (Autorità Garante della Concorrenza e del Mercato) and, in general, of the national and European competition authorities, with particular reference to the commitments often undertaken by the parts of a concentration, or by entities under investigation for suspected infringement of antitrust rules, to correct the anti-competitive conduct. 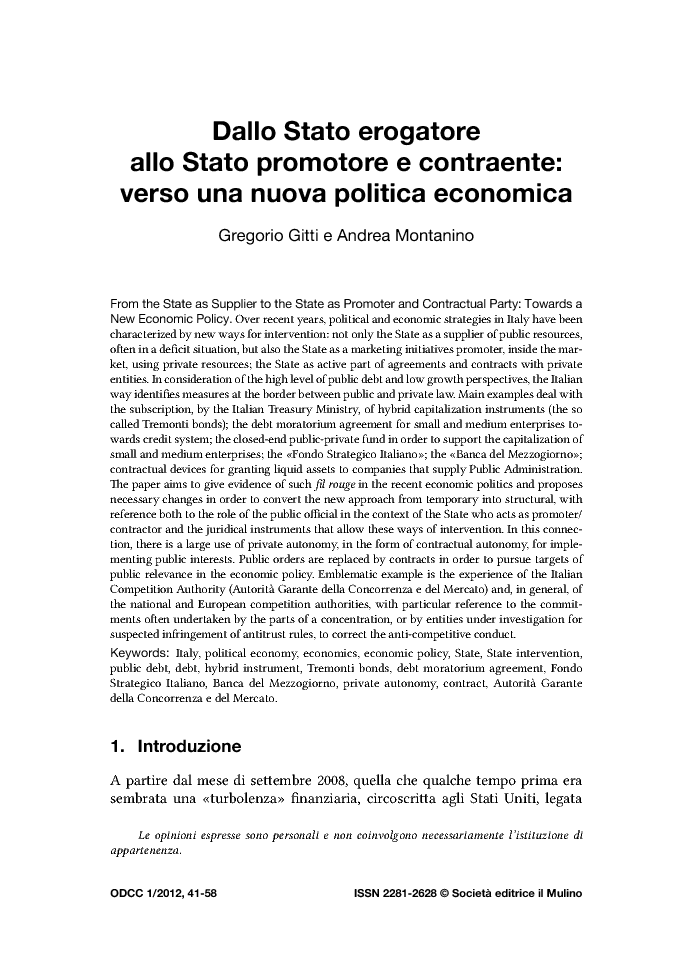