In this issue we already clearly see how heterogeneous the problems and specific themes are within what is generically referred to as the legal-philosophical sphere. To avoid this fragmentation being confusing and making all constructive dialogue impossible, the decision has been taken to promote circumscribed thematic focuses allowing deeper explorations and also, if possible, an in-depth encounter between different voices. The first of these focuses concerns the relationship between bioethical and bio-law, which has become a major section of studies in legal philosophy. This also favours appropriate integration of the general picture already traced out in the first two issues of the journal. In our time bioethics has become the main locus of normative ethics debates and it is also one of the main fields of encounter and clash between ethics and law, with the significant complication of the intervention of the biological and medical sciences. In this connection, philosophy of law is brought into play at least twice: as theory of law it is called on to test the adequacy of the traditional legal categories and as philosophy of justice it has to measure the limits within which public choices can legitimately condition private choices. The second focus is devoted to the old yet ever new theme of legal interpretation. Despite the boundless scientific production concerning it, because of the multiplicity of approaches, the variety of points of view and the continual transformation of its object, one certainly cannot think that theory of legal interpretation is a task that has been completed or even one that is going to be completed. On the contrary, precisely the present tendency to excessively expand the confines of interpretation renders even more necessary that conceptual actio finium regundorum for which the analytical theory of law has a particular propensity and a strong vocation. In the essays section there are writings that are certainly not connected to one another by any logical thread and, nevertheless, are representative of ongoing investigations and open issues in the national and international academic panorama: a theoretical proposal for global reading of law in a pragmatic sense; consideration of fundamental rights as principles linked to practical reason and philosophy of action; an exploration, with theoretical intents, of the relations between equality and reasonableness in Italian constitutional law; finally, close study of disability as a testing ground of contemporary philosophy of justice and as an anthropological challenge. Obviously the theses upheld in these essays are all controvertible and it is to be hoped that in our scientific community they will give rise to a debate that the journal would be very happy to host. 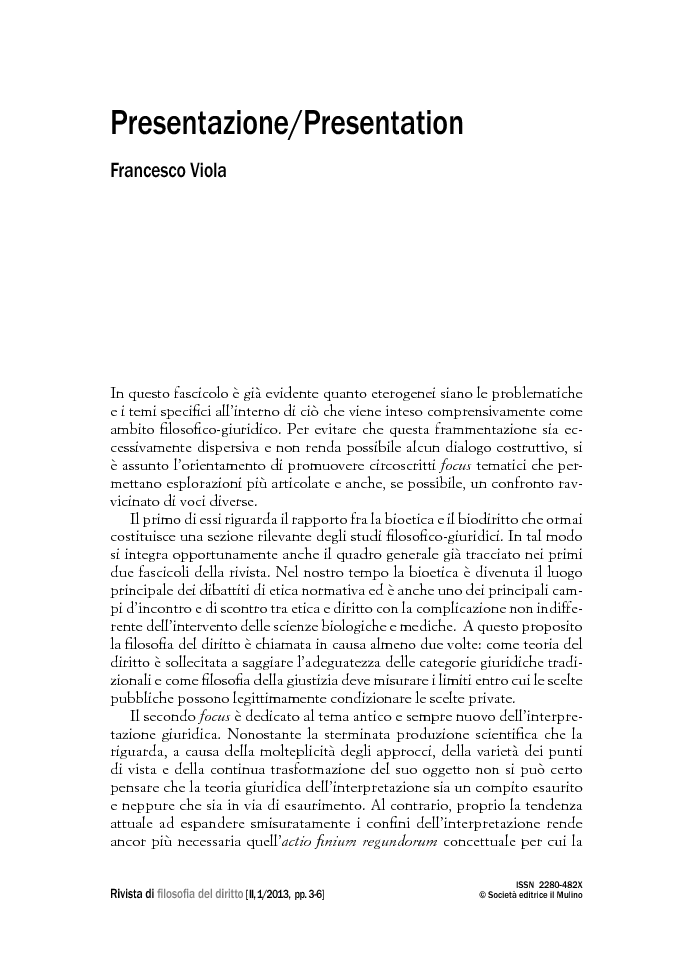