The constitution of women as a collective political subject has involved, throughout the history of feminism, the search for a group identity, a shared definition and consciousness of what it means to be a woman. This essay aims to investigate the self-understanding and self-definition of women as a group, after the shattering of the subject, the fragmentation of movements, and the multiplication of identity politics that have marked the evolution of feminism in the last three decades. I will argue that, since the 1990s, a new universalism has been sought through the dominant focus of the international women’s movement on violence against women, as a theme capable of uniting “victimsµ across social and cultural differences, and geographical distances. I will then analyse the theoretical and political consequences that derive from assuming violence against women as an identity glue, focusing in particular on the passage from the category of oppression to that of victimization, and on the double risk of gender essentialism and of paternalism that derives from the emphasis on the “victim subjectµ. In the last section, I will critically question the relationship between violence against women and vulnerability, noting that at stake in the discourse on violence against women is a negative understanding of vulnerability, which makes it synonymous with “violabilityµ. This risks distorting the contribution that an increasingly rich philosophical analysis of vulnerability can offer, instead, to rethink the collective subject of feminist politics, beyond identity. 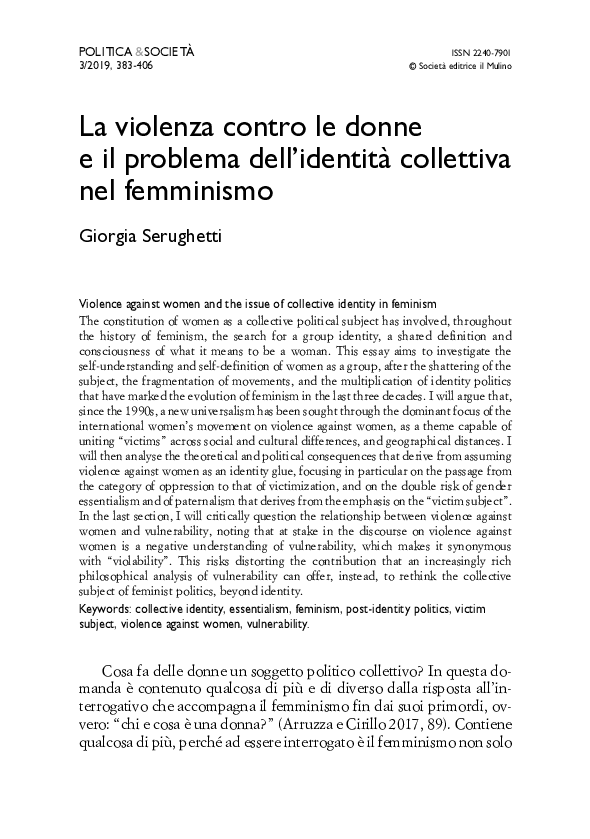