The article focuses on a conceptual alternative which is advocated as being crucial for the contemporary political philosophy. The alternative that needs to be examined and deconstructed is the one between "group identity" and "collective identity". By using the group as unity of reference alias modality of identity building, dangerous misunderstandings can be avoided: those who refer to the "group" do so, in the first instance, in order not to give for granted compact, strong identities which are independent of individuals, unlike the concepts immediately evoked by the notion of "collective identity". The term "group identity", secondly, implies the capacity of individuals to reflect and negotiate and compete according to specific intersubjective frames of behaviour and understanding. Intersubjective identity is the intersection between the subjective and objective aspect of a continuous, unstable, conflictual and asymmetrical process of re-elaboration of shared experiences, but in order to be maintained over time it needs vessels, symbols. They are the meaningful glue, in need of permanent reinterpretation, of the living together (2, 3). This is the core of the first part of the article. Therefore, in the second part some symbols are summoned to a pervasive criticism, through various hermeneutical tools, in order to help citizens and institutional bodies to prevent the most dangerous involutions in the everyday metaphorical pragmatics concerning identity issues. Racism and xenophobia in politics are to be detected in advance by means of an accurate polyphonic sensitivity towards the emerging of the corresponding imaginaries in the cultural and social dimensions of experience (4, 5, 6). 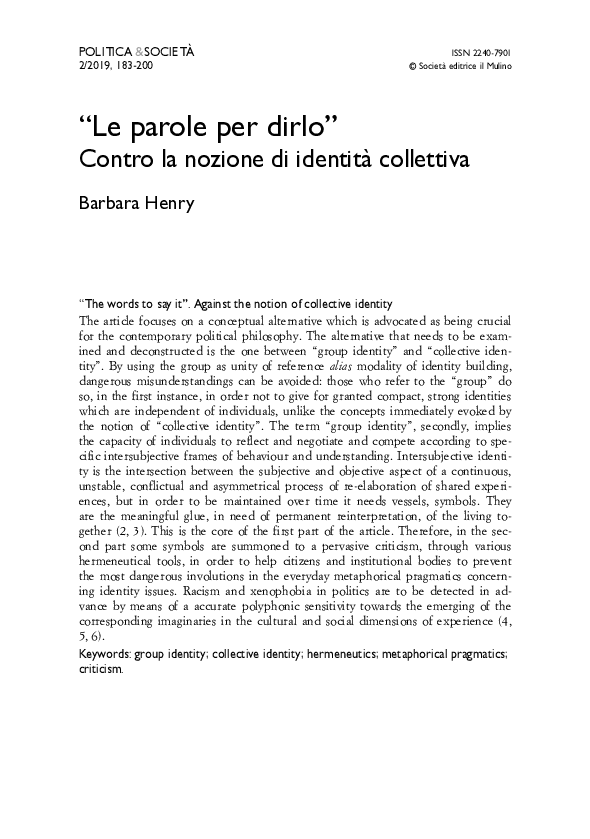