The multiplying of the most different and conflicting theories - as numerous and sophisticated as unable, it appears, to give the final answer to the riddle of the self-conscious subjectivity - seems to reveal a dead-end in the current dispute about the consciousness of one's own experiences. On the one hand reductionistic theories go on proposing strained interpretations and paradoxes, in an attempt to prove the sheer identity between neurobiological (or computational, or generically physical) configurations and the mind - so much so that even eliminativistic proposals turn out more consistent, or at least not as paradoxical. On the other hand the various forms of antireductionism appear unable to refute at the root the reductionistic claim just because they share its basic premise: the metaphysical dogma of naturalistic monism that leads to homologize the "sui generis" structure of subjectivity to empirical or material phenomena, ignoring the inherent problematic nature and the uniqueness of his logical statute. The discussion of an exemplar case, that represented by Thomas Nagel's long theoretical path, leads to the conclusion that the riddle of subjectivity cannot be properly faced without getting back to the philosophical awareness (proper e.g. to Kant and Wittgenstein) that the "status" of the self-conscious subject involves as much an empirical constitution as an unavoidable transcendental frame which eludes in principle his identification with a determinable space-time object. 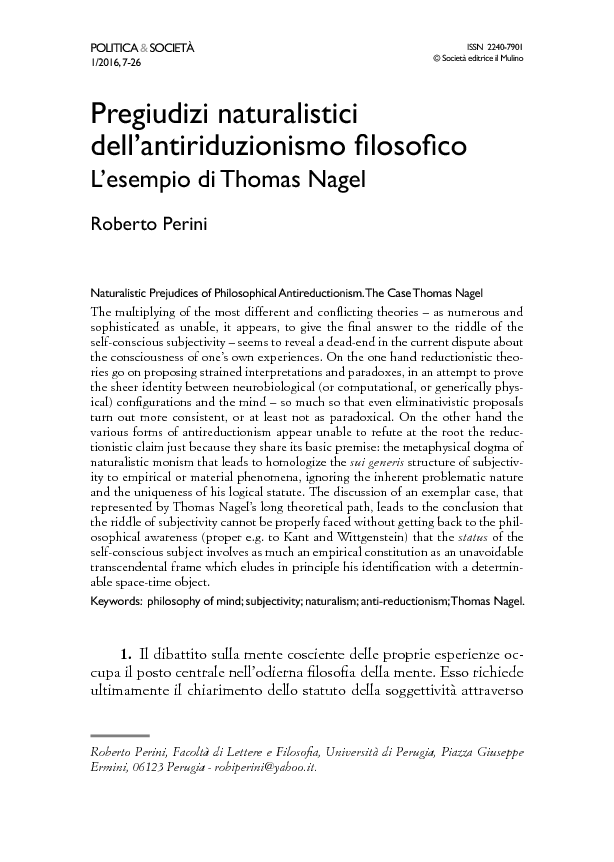