When we reflect on the future of democracy, it is essential to ask what kind of future we have in mind. Attitudes towards the future change, in fact, over time. In particular, our attitude towards the future in the last fifty years has oscillated between the expectation of an epic future and the nostalgia for a lost future. In the essay, this ambivalence is illustrated with two narrative examples drawn from the English writer Jonathan Coe. Inevitably, our relationship with the future is mainly shaped by the faculty of imagination, especially when it comes to the future of such a precious thing as democracy. However, the desire to curb the hazards associated with the abuses of political imagination (utopianism, populism, demagogy) has pushed some of the leading twentieth-century theorists of democracy to see the issue of the future of democracy solely in terms of an institutional problem-solving. The democratic puzzle, though, does not only concern the rules of the game, but, more generally, the "mise en forme" (C. Lefort) of society. And in a late-capitalist context, to give a democratic form to society has become a very complicated task, as individuals are mostly absorbed by a dream of personal self-fulfillment that has strong de-realizing effects. In conclusion, it is suggested that a nonheroic conception of democracy, rather than a new democratic dream, might put a stop to the force of attraction that the consumerist pursuit of happiness exerts on the imagination of democratic citizens today. 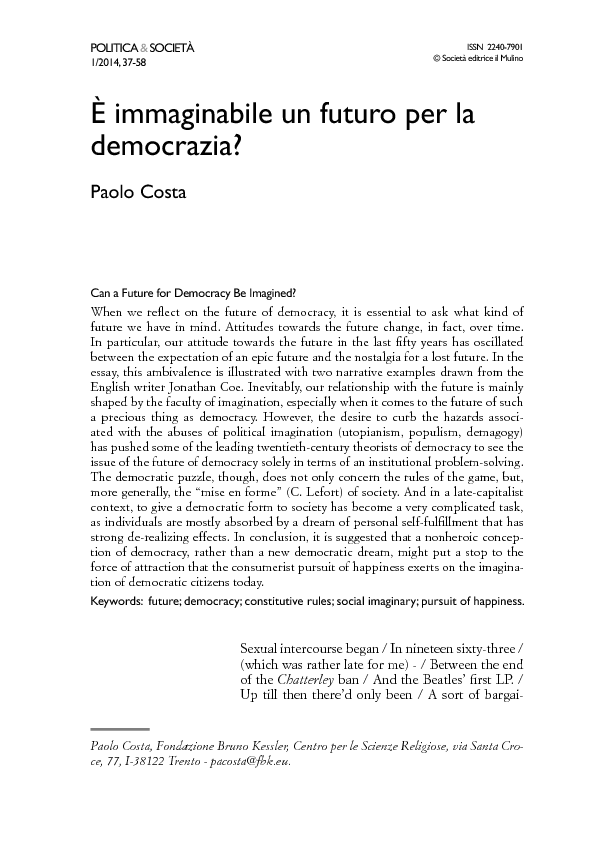