This conversation originated in a radio interview of Patrick Wolfe conducted by J. Kēhaulani Kauanui on her public affairs show, «Indigenous Politics: From Native New England and Beyond» from July 13, 2010. The article is an expanded version of that interview, updated to reflect our ongoing dialogue. Kauanui invites Wolfe to lay out the central features of his approach to settler colonialism, which he views as a project of eliminating and replacing Native societies on their land. Mindful of the approach's implications for both activism and scholarship, Kauanui guides the conversation through such key issues as: Settler colonialism's cultural logic of elimination - how is it defined and what are its various modalities (ethnic cleansing, spatial confinement, blood quantum, etc)? Who is a settler - are enslaved and/or indentured people settlers? What is the difference between colonies with settlers (Algeria, South Africa, etc) and settler colonies (Australia, Hawai'i, Palestine, the USA, etc)? What uses does this approach have for the campaign to liberate Palestine from Zionism (especially BDS)? 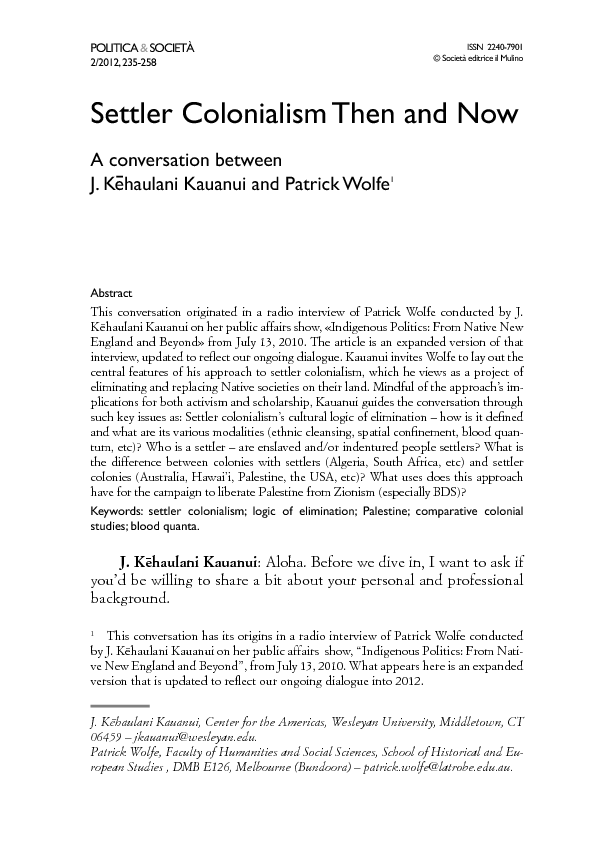