Zygmunt Bauman in his essay Making and Unmaking of Strangers (1995) claims that the new element in the postmodern world is not the emergence of the uncertainty. Its novelty lies in its relocation from a temporary discomfort to a permanent condition. Almost three decades later, this diagnosis is optimistic in at least one certain respect. Indeed, socially relevant algorithmic decision-making processes add a new dimension to the uncertainty of war, colonialism, economic and technological expansion, and to climate change. According to Bauman, the essentially uncontrollable and undecidable future is already doomed, even in the absence of this new kind of governance used to predict or prescribe human actions or to make decisions automatically. The overwhelming sense of uncertainty characteristic of the way of life stigmatized by Bauman now includes a kind of technological determinism that claims to know us better than we know ourselves. In this article, I would like to propose a reflection on deliberation mechanisms that considers the changed information ecology resulting from the introduction of automated systems. I will focus on the transformations that the decision-making process undergoes when it becomes an automated decision-making process. I will show how the deliberation mechanisms implemented by automated decision-making systems draw on a different epistemology of the deliberative process and that this epistemology does not take into account the features of the epistemology of deliberation required in a civic context. 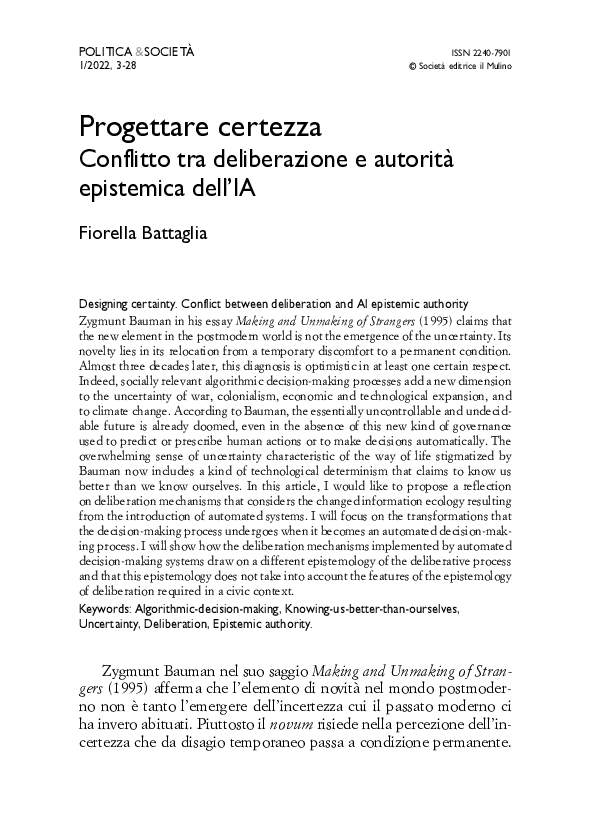