At a time of heightened anxiety, fear and need to fix «the Other» - the Stranger - in place occasioned by unprecedented inflows of refugees into Europe, we pose the question to what extent, and in what productive manner, Europe might «get lost» in the world today. Starting from a fraught moment of racialized interrogation of supposedly «mistaken identity/location» experienced by one of the authors along the Dutch/German border of Nijmegen (The Netherlands) and Kleve (Germany), we contextualize such an encounter within a modernist tradition of Situationist "dérive", the better to tease out the political potentiality inherent in the act of «getting lost» in an urbanized cross-border region such as the one we collectively inhabit. Placing intra-European "avant-garde" spatial practices critical of capitalist modernity in dialogue with postcolonial writings on 18th-century slave maroon societies at the so-called peripheries of European empire, we explore to what extent the act of «getting lost» conjoined with «going maroon» may be recuperated today by refugee and migrant solidarity groups within Europe's borderlands so as to open up emotional pathways beyond fear, partition, isolation and the need for purified spaces of security. To empirically substantiate our argument, we build on a multitude of everyday spatial practices of migrant solidarity networks in which we are actively engaged astride our Dutch/German border. We conclude by re-positioning a 17th century «Map of Love» (inspirational to the Situationists) through a maroon border lens to imagine futuristic territories of Lost Europe(s). 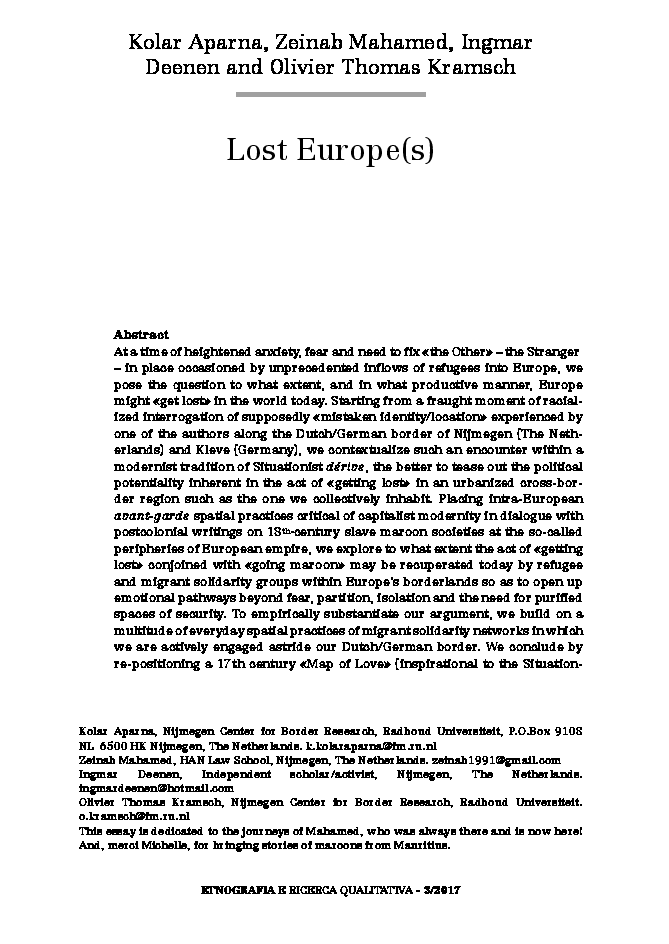