In recent years, a thriving genre of scholarship has emerged around the concept of locative media in which the latter is often framed in relation to a critical tradition of site-specificity as a kind of remedy to a cultural diagnosis concerning the negative effects of mediation on place. By way of contrast this paper's approach may be understood as departing instead from the grammatical definition of "locative," corresponding, as it does, to the prepositions "in," "on," "at," and "by," and denoting the idea of positionality. In particular I look at how the concept of positionality is developed within a tradition of philosophical critique associated with - though not identical to - Fredric Jameson's notion of cognitive mapping. In this essay, then, I discuss: how Jameson envisioned an aesthetic practice that sought to map totality as a remedy to his famous cultural diagnosis of postmodernism; how the notion of positionality may be understood in relation to a tradition of Marxist metaphysics; and how the idea has subsequently been taken up as well as critiqued within contemporary debates in media theory. This essay thus concerns the relationship between cultural critiques broadly concerned with the problem of disorientation and remedies figured in terms of positioning the individual in relation to an objectively mappable and comprehensible external reality. Whereas the concept of positionality has been developed as a sort of term of art within feminist geography - in reference to a reflexive approach to the production of academic knowledge opposed to "the god-trick of claiming to see the whole world while remaining distanced from it" [Rose 1999, 308], as well as in feminist science and technology studies [Haraway 1988] - it should be noted that, with some minor reservations, Jameson's project is committed to the global perspective, an arguably legitimate use of the term in light of how recent debates in literary theory seems to have endorsed this particular interpretation ("Global Positioning Systems" was, for example, the topic of a major international literary theory conference in 2013, featuring a track entitled: "Fredric Jameson's Spatial Dialectic as Global Positioning System," at which I presented an early version of the present article [American Comparative Literature Association 2013, 168]). In this essay, then, I explore how aesthetic theories and avantgarde practices have sought to develop global solutions to the search for place in a networked age, by tracing a lineage from Kant's concept of the sublime via Lukács' concept of totality through Situationist avant-garde art practice to contemporary digital mapping practices, concluding by questioning the extent to which these practices remain wedded to their initial critical intent. 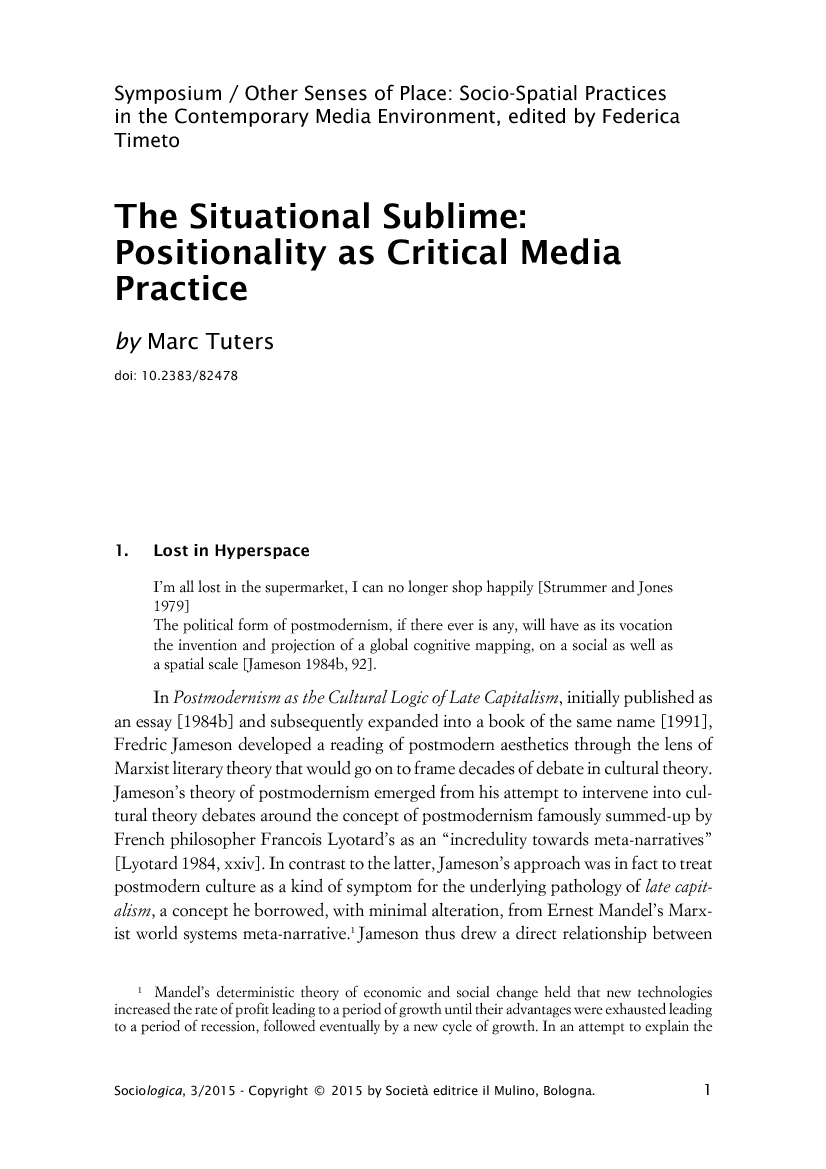