Creative industry has become a hot topic in the political debate but also a key factor of postindustrial knowledge-based economies. In the last two decades, the rise of a creative economy has drawn the attention of many scholars too. Though this interest led to a growing body of studies and analysis, the research on field is still scarce. The concept of creative industries has its origins in the UK with Tony Blair New Labour's government of the late Nineties. Rapidly, the term as well as the policies adopted to promote cultural industries and creative economy have spread around the world. Recent reports by international organizations, such as UNESCO and UNCTAD, underline the importance of a sustainable strategy built on creative economy as a form of industrial policy, since «human creativity and innovation (...) have become the true wealth of nations in the 21st century» (UNESCO, 2013). The economic impact of creative industries has been demonstrated by many research, which show the important contribution to growth, trade and employment generated by those activities. Though such contribution varies widely across countries, growth rates are higher than the average of economy. According to European Commission, the creative industries in the 27 countries of the EU generate 860 million of Euros in value added, representing a 6.8 percent of GDP, while employment is approximately 14.0 million or 6.5 percent of the total EU workforces. Interestingly, innovation in creative industries encourages new ways of interacting with customers, for instance involving users in product and service development or stimulating collaborative consumption. Actually, for most of scholars, creative industries overcome the boundaries of cultural economy, acting as a driver of innovation for the economic system as a whole. The articles in this special issue of «Economia dei Servizi» aim to take discussion of the creative industries focusing on the role as well as the management of innovation within creative organizations. By analyzing a wide range of sector (i.e. animation industry, design, fashion retailing, cultural institutions), adopting different theoretical perspectives and methodological approaches, the authors provide a valuable and original framework of creative industry evolution. 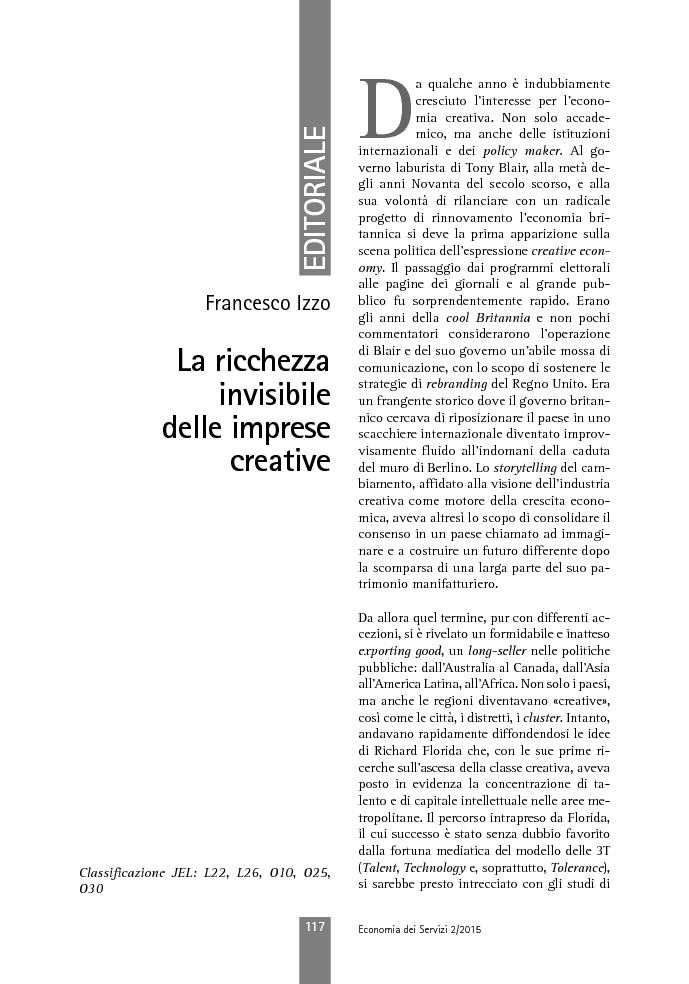