Within the widening research area of efficiency measurements of non-marketed public services, this paper deals with the services provided by Municipal police and the problem posed by the presence of non-discretionary variables. If there are factors and-or outputs that do not come under public managers' discretion, then conventional efficiency measurements identify potential gains which actually are out of reach. The role of non-discretionary variables should also come to bear in the attempt based on «standard cost» currently undertaken by the Italian Central Government as a guide in financing local tiers of government. Data Envelopment Analysis (DEA) for its nonparametric characteristics and its parsimonious requirements in terms of data availability is an obvious choice for efficiency measurement in the public sector. We propose a Slack Based Measure of efficiency suitably modified to allow for non-discretionary variables. The data refers to 2009 and covers 38% of the Italian Municipalities (64% in terms of population). As largely expected, efficiency indices are not uniformly distributed over the country. High level of efficiency characterise the North-East, while the lowest indices are observed in the Southern regions. There is a positive correlation between size and efficiency. However, the optimal size is for a Municipality of about 20 thousands residents. Thus providing evidence for the widespread conviction of a scale efficiency problem for small Municipalities. On the opposite side, large Municipalities operate under decreasing return to scale and tend to show heavy efficiency slacks in terms of units of labour. In comparing these results with those provided by COPAFF (2012), significant differences emerge in terms of efficiency indices and their distribution. Differences due, among other factors, to the role played by non-discretionary variables. 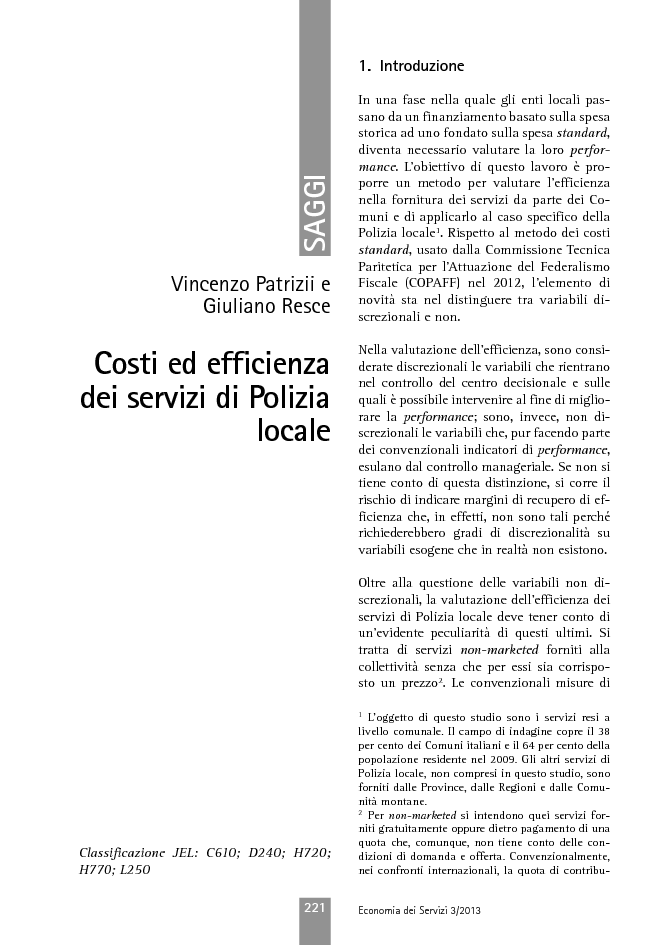