World's population has become lately a predominantly urban population: out of the 6.5 billion world's population, 3.3 billion live in cities. In a global context, cities have become the places where new services are developed, serving as hubs for networks that are ever wider and ever more interconnected. Cities attract flows of mobility, and - thanks to the people who have moved there from elsewhere - local communities are taking on an inter-cultural dimension. By looking in-depth at a panorama of the world's largest metropolitan conurbations, the author highlights at once the propulsive effect of global cities on the economy and the risks faced by such high concentrations of people and businesses, in relation both to poverty and marginalisation and to environmental impact. In Europe (as elsewhere) urbanisation is evident at all levels, and cities are becoming successful in terms of revenue production, economic activity and creativity. However, a danger to this urban model is represented by social factors, which need to be understood if urban communities have to identify themselves as such. It is, then, crucial to analyse the way in which a territorialised system as the Italian one can bring itself into line with these new demographic models. The success of Italian cities is dependent both on the dynamics of the systems of social, entrepreneurial and political organisation on the spot and on the strategic role of the service industries (including the creative industries). However, even here, competitive pressure runs the risk of sacrificing the value of social relations: the transition from being a manufacturing city to being part of an urban "region " specialised in technology and services can also too easily give rise to a polarisation of the social infrastructure. The underlying challenge is to build a true metropolitan community, where the convergence of minority interests with the mainstream is a non-negotiable pre-requisite of progress - failure to do so would result in decline and, especially for Italy, in being left out of major global processes. 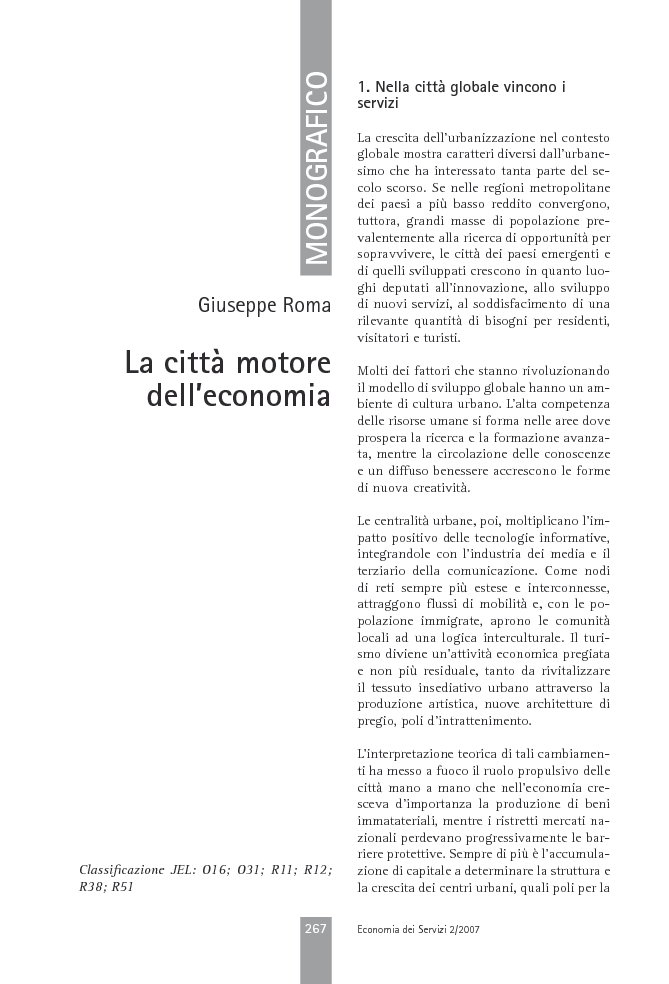