Throughout the past fifty years, the multidisciplinary development of electronic languages and their aesthetics has been in tune with the progressive extension of works in space: from the more confined areas of video-sculpture and video-installations to video environments and the gigantism of urban projections or video-mapping. Following the digital turn, on the one hand the electronic image has been physically «deterritorialized»; on the other, the progressive suppression of the specificities of audio-visual languages, endorsed by the digital world and defined by Krauss as a «post-medium condition» (1999), has defined a renewal in the relationship between cinema and video. This led to the creation of what Manovich defined as «post-media aesthetics» (2001), a tool that allows us to imagine new forms of expanded art. In the wake of the historic Italian experience of Studio Azzurro, new and young «multimedia workshops» have recently developed multimedia narrative projects for video environments, installations and videomapping. N!03 and Karmachina are examples of such visual design studios. Their work lies at the intersection between art and media, science and technology, and seeks to create profound interconnections between the real world and the digital universe. The latter is made more understandable and tangible in the stories that arise from the need to narrate spaces, material objects and specific events, all of which are enabled by post-media aesthetics. Through the analysis of a few selected examples, this article aims to focus on these various forms and purposes of storytelling, which reflect the development of the audio-visual languages after the digital turn, as well as the evolution of society and its communication systems. 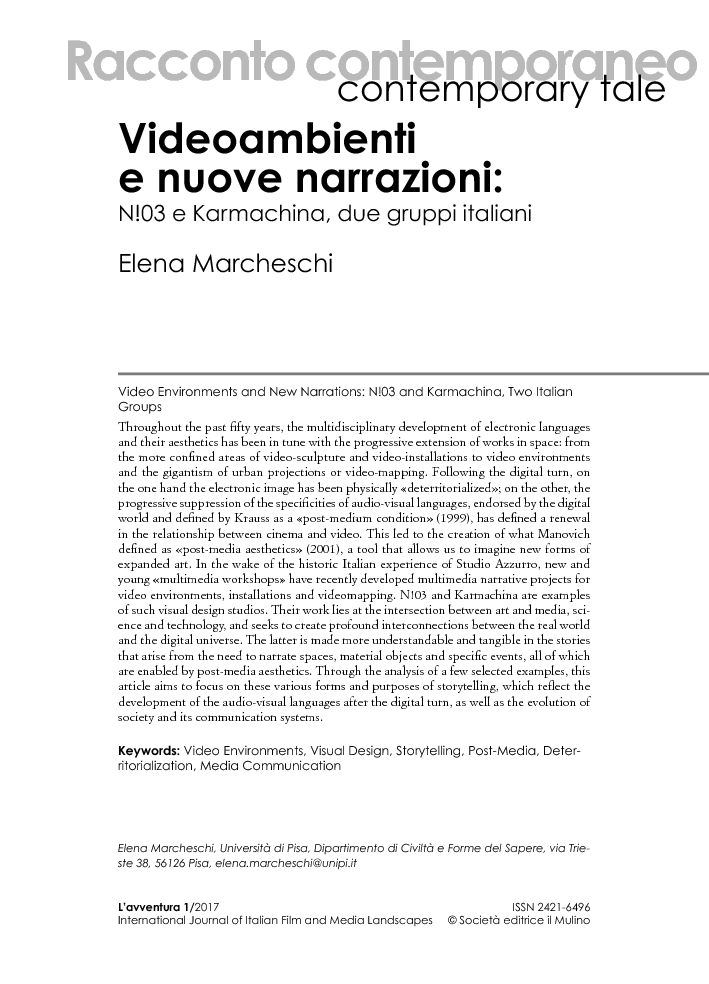