The essay puts forward a historical and theoretical reflection on a production gap in the Italian film industry from the post-War period to the beginning of the crisis. On the one hand, there is the standard mode of production of mainstream cinema, in the phases ranging from Neorealism to the film law n. 1213 and from the early sixties to the Constitutional Court’s decision which liberalized broadcasting and determined the beginning of the Italian film crisis. This a period was dominated stable rules, such as the financial contribution of regional distributors, guaranteed minimums, bills of exchange, subsidized loans discounted at the BNL, international productions, and, of course, the creative role of producers like Ponti, De Laurentiis, Cristaldi and Lombardo. On the other hand, there is an «extra-ordinary» cinema, which took different shapes according on the phases of a complex period such as the one in question (1949-76). There were independent and sometimes experimental modes of production, ranging from the «infamous» article 28 of the law n. 1213 to cooperativism; from the role of short films and documentaries to that of advertising and Carosello; from the production system of Rossellini’s films produced for European television to the experimental cinema of Carmelo Bene; from Zavattini’s «free newsreels» to the «engagé» circuit; from the birth of videotape to political propaganda videos; from television dramas to television «experimental» movies; from the ideological production of Giuliani De Negri to the independent and anti-ideological production of Antonio and Pupi Avati; from animation films by Bruno Bozzetto to the Parco Lambro event shot by Alberto Grifi. This essay analyses a period which represents a unique opportunity for ongoing research; at the same time, it also provides an opportunity to reflect on the very notion of «mode of production». 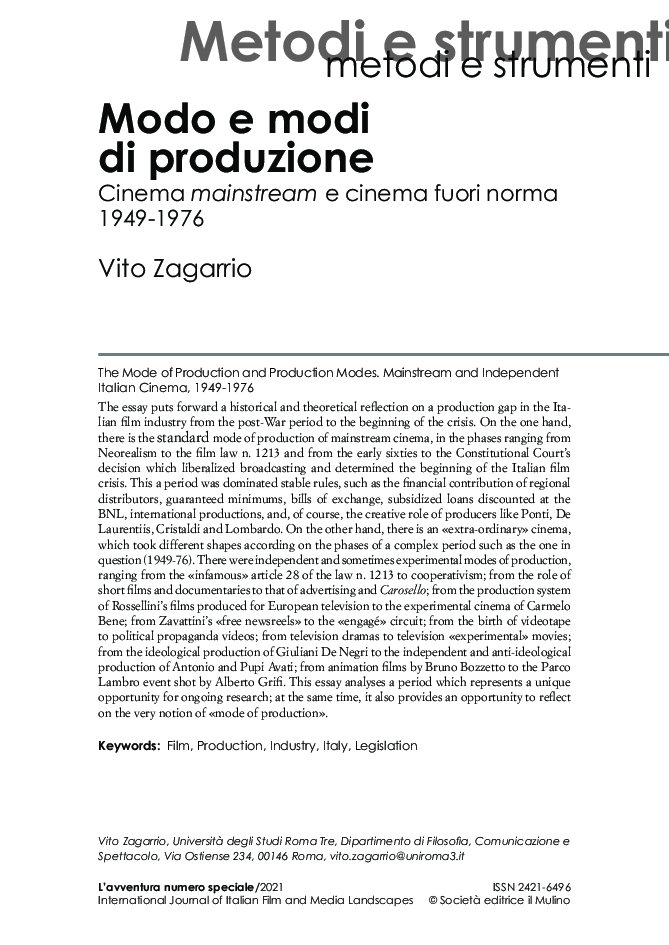