This paper aims to investigate the presence of Italian cinema in non-theatrical circuits in the United States. We compare two different patterns of dissemination of Italian culture during the last decade: on the one hand, the role of contemporary Italian cinema in several film festivals; on the other, the screenings, events and retrospectives organized by a series of cultural centers. In the first part, we will provide an overview of the presence of non-theatrical circulation of Italian cinema abroad, with specific references to the United States, such as Italian cinema in U.S. film festivals and those specifically related to Italian cinema. In a second part, we will focus on two specific case studies in the American Midwest: the Italian Film Festival USA and the Wexner Center for the Arts in Columbus (Ohio). In the first case, we will trace the paths of what the Festival director Barbara Klein calls a «cinematic tour of Italy»: a touring festival that takes place every year in April across various cities of the Midwest and beyond, from Cleveland to Indianapolis. In the second case, we will discuss the cultural and social role of Italian cinema in the film programming of the Wexner Center for the Arts at The Ohio State University campus, one of the most important cultural hubs of the area. Our sources are schedules, programs, and interviews with cultural professionals. Taking these examples as a paradigm, we try to understand how these two different types of circulation influence the narrative patterns and the transnational reception of Italian culture storytelling abroad. 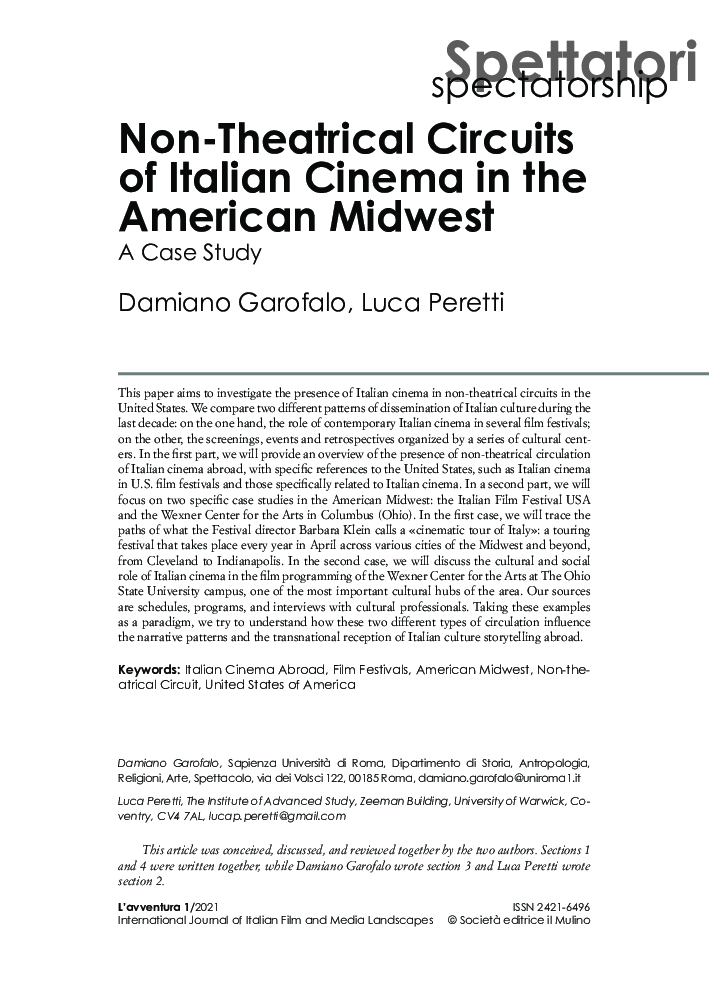