It is well-known that Jews have contributed remarkably to the development of modern science. In this context, a narrative has developed which identifies the roots for this special success as being mainly in a long tradition of Jewish learning. But there are also various social and epigenetic approaches or the relation to special Jewish values which have been claimed for this phenomenon. We looked for an explanation in a special case: teachers of physics at German and Austrian universities up to 1933. This provided us with a sample of nearly 100 individuals. While the designation «Jewish» is often used in a diffuse way and also includes those who are of «Jewish descent», our criterion was stricter: we required Jewishness on both parental sides, independent of any affiliation to a Jewish community. Thus we were able to draw conclusions about a religious, cultural or social «Jewish imprint». The social background of the physicists’ fathers differs characteristically from their gentile counterparts. It may be no surprise that because of social conditions and professional restrictions, these Jewish fathers were mostly members of the business and financial class. However, when we went into more detail we found that the members of our sample not only belonged to the upper class; a considerable number were also entrepreneurs in new and expanding fields. In this respect the Jewish upper class showed a drive for innovations and also, implicitly, for science. Moreover, when this class was seeking professions with high reputations, probably amplified by Jewish marriage strategies and their high esteem of academics, a career in science became a desirable option. Due to the comparatively small number of scientists, this led to an overrepresentation of Jews in this field. Insofar, the main source for the Jewish success in science had been the economic success of previous generations. Subsequently, a look at the overrepresentation of scientists with a «mixed» background, i.e. where one parental side was non-Jewish, underlines that both groups had something in common which was not a «Jewish» imprint in a religious sense, but involved elements of Judaism which were connected with high social and educational standards. 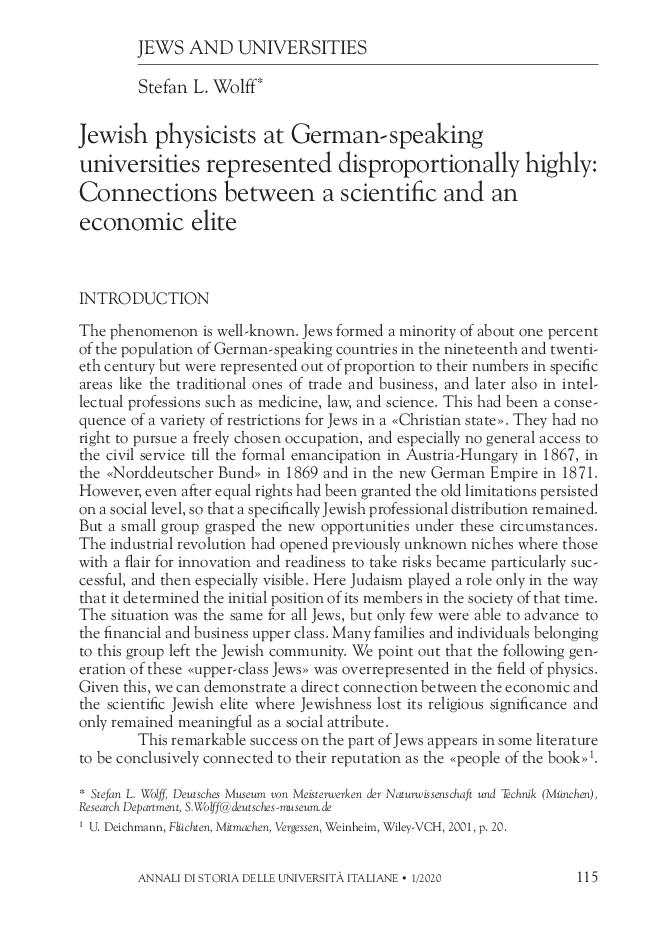