Many studies related to medieval Europe clearly show that the practice of medicine by the Jews was always somewhat widespread and also involved a not insignificant number of women. For late medieval and Renaissance Italy, there are many documents which inform us in this regard. It is not always very clear, however, what the Jewish education path was and how Jews could come to qualify as doctors. The sources available (both in and outside Italy) often show how the skills required for practicing as a physician were first acquired through education at home, and therefore within the Jewish world. Often the training took place within the family; «home training» also involved a certain number of girls, especially outside Italy. At the end of the period of study and practice (which had never been separated), the young Jews were granted the title of magister. In addition to private training, Jews could also undertake (or hone) their medical training by attending university: in Italy there are testimonies to this effect from at least the fourteenth century onwards, and documents confirming this practice tend to multiply during the fifteenth and sixteenth centuries. In some cases, Jewish doctors were allowed to solemnly conclude their university studies by passing an exam. In this paper, I will try to discuss two questions: how Jewish students could attend university to become doctors, and how some Jews managed to gain a doctorate in medicine in Italy, from the end of the fourteenth century and/or the fifteenth–sixteenth centuries despite a millennial tradition that forbade them because of the principle of Jewish «servitude». The theme is not a new one and has already been addressed by various scholars, most recently by the late Michele Luzzati. Taking into consideration the studies published so far on the subject, I will try to summarize and discuss the main results and indicate possible new lines of research. 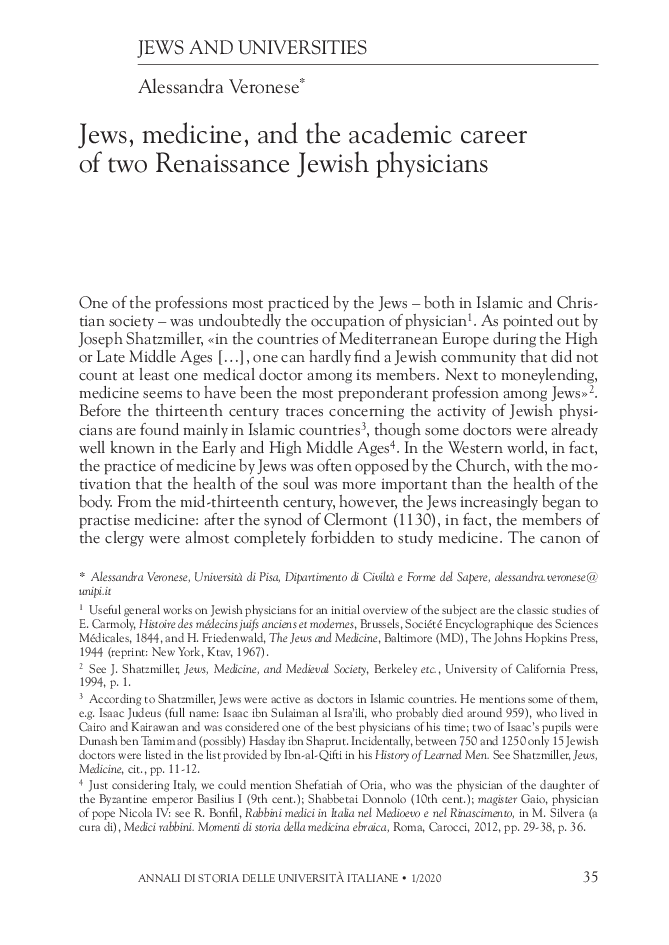