The question of the relationship between Jews and universities in the age of humanism seems far from having reached a shared consensus. If the presence of a remarkable number of Jews among the students of medicine is a well-known and relatively well-researched field, our knowledge of the relevant facts concerning the humanities is less firmly established, with scattered testimonies and quite contradictory hints to be culled from a vast array of potential sources of evidence. On the basis of selected episodes and profiles (in particular including ‘Ovadyah Sforno, Jacob Mantino, Elijah del Medigo and Abraham de Balmes, all of them significantly involved with universitarian institutions in different ways), a reflection is presented on the possible correlation between the steady, if not unchallenged, penetration of Jewish intellectuals into the late medieval academic world and the crisis of the medieval university in the face of the anti-Aristotelian and extra-academic features of European humanism. Far from suggesting a causal nexus between the two historical phenomena, it becomes conspicuous that a significant Jewish component was present both in the attempt at renovating academic life and study programs at established universities, and no less in the typical humanist attempt at founding alternative institutions of higher learning at Renaissance courts and at centres without a medieval university. The Jewish component of the Renaissance, whose importance has been finally recognized, can be studied with profit from the vantage-point of a crucial stage in the evolution of universities between the end of the fifteenth and the first half of the sixteenth century. The entrance of the Jews into the citadel of higher learning was far from an assault, but neither was it a triumphal march; rather, it happened through the back door, as it were, more often than not as the result of a pragmatic cooptation. The intellectual landscape we perceive at the end of this period was a radically changed one, and so were its protagonists – the Jews among them no less than the Christians. 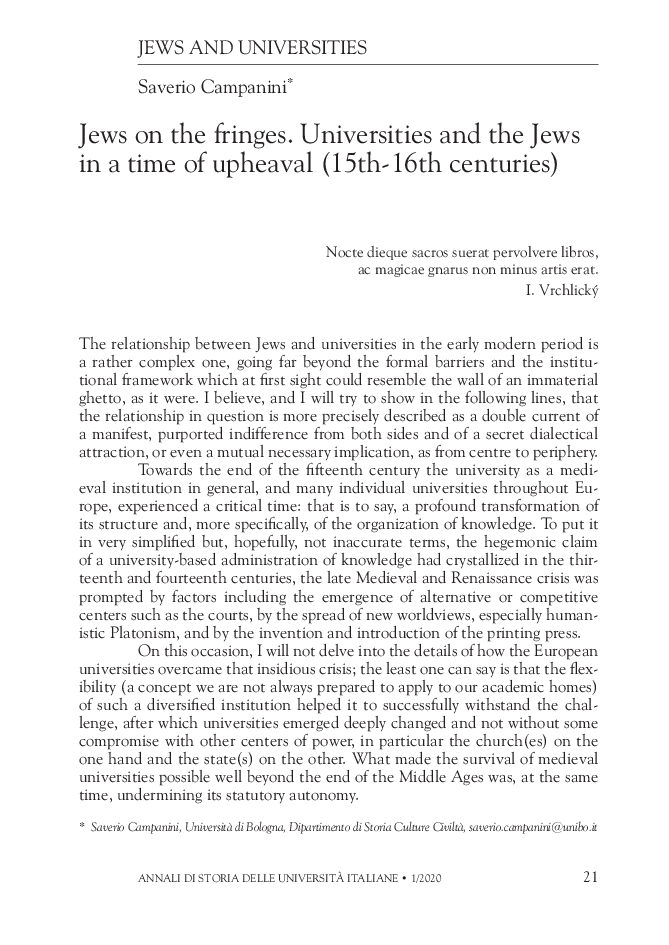