This paper presents a panorama of the educational role of the Jesuit Academy of Vilnius during the years 1579-1773. The aim of this research is to evaluate, on the one hand, to what degree the teaching and pastoral strategies adopted by the Jesuits fitted into the wider context of the Catholic reconquest and, on the other, in what ways the Society of Jesus adapted to the specific nature of the local context. Based, firstly, on the wide-ranging historiography relating to the Academy, the research also employs several primary sources including documents historically housed in the Roman Archives of the Society of Jesus or placed in Polish, Lithuanian and Russian cultural institutions following the dissolution of the Society, as well as academic material. The first section presents the political and social context that determined the creation and development of the Academy. The second concerns the network of institutions under the direction of the Academy, among which standout the colleges that trained the clergy, the Collegio dei Nobili, the Marian Congregations, the printing house and pharmacy. In presenting the role of the Academy in the multi-religious context of the Polish-Lithuanian Society, the paper focusses on relations with Protestants and members of Churches of Eastern rites. It then goes on to present the Academy’s cultural contacts with foreign Catholic universities. Finally, it examines the teaching programme in the context of the Ratio studiorum tradition and reforming tendencies that manifested themselves during the 18th century. In conclusion, it underlines the determining role of relations between Jesuits and the nobility in the development of the Academy. This social class, indeed, was the beneficiary of the education provided by the Jesuits and, in accordance with the demands of the future public life of the nobility, the Jesuits adapted the course content and teaching modalities. 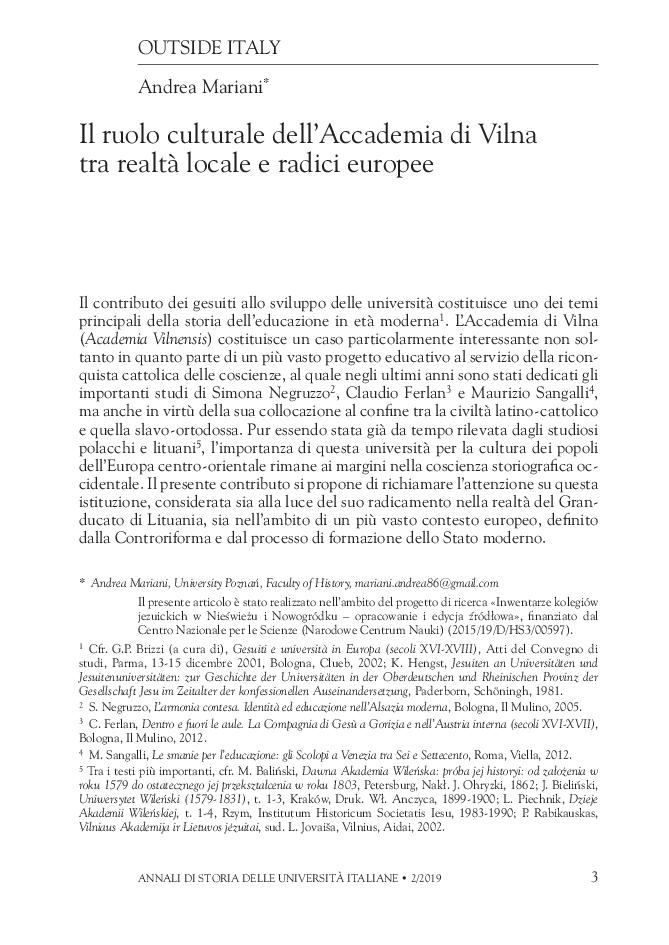