We should like, with our paper, to highlight another aspect of the Christological controversy that took place immediately after the 'nestorianization' of the Church of the East in 612 AD. We mean the controversy of "Martyrius- Sahdona" and the reaction of the catholicos "Gewargis I". In Martyrius' Christology, the 'divinization' of the mystic is seen as a consequence of the 'divinization' of the human nature in Christ because of the union of the two natures that occurred in the one hypostasis and person of the Word, refuting in this way, the official doctrine of his Church, i.e. the two natures and hypostases united in the one person of Christ. Against this Christology, the catholicos Gewargis I attempted to intervene on two levels: canonical, through a synod convoked in Qatar in 676, and doctrinal, through a letter written in 679/680 and sent to Mina, a Corepiscope in Persia. In the synod, there was a controversy against certain 'false monks' and a focus on the importance of the Orthodox faith to counteract heretics; his letter, on the other hand, expressed a true controversy against those who taught the hypostatic union, i.e., Martyrius and his followers. In the letter, moreover, the catholicos proposes a doctrine of 'divinization', based, however, on the official Christological doctrine of his Church. Their Christologies will be studied and compared so we can illustrate better this important period of the history of this church. We will see also how the catholicos developed the Christology of the two-"qnomē" so that the doctrine of 'divinization' could be applicable in its metaphysical system. 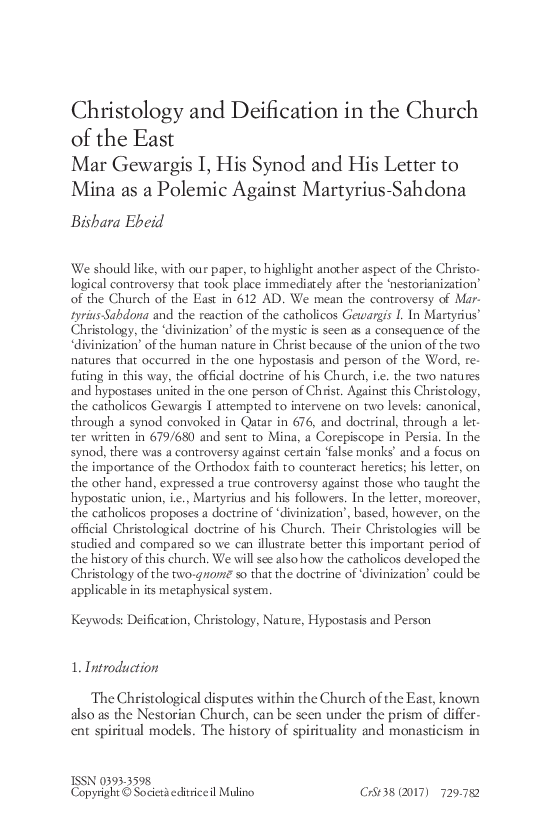