Both leftist and conservative Catholics often described the remarkable growth of the Protestant evangelical churches in Latin America as the “invasion of the Protestant sectsµ. For the former, Pentecostals, along with the more recent wave of conservative evangelicals, helped to reinforce the existing social order in Latin America, thus representing a powerful current of regression and a tool to be wielded by authoritarian regimes. The latter, on the other hand, denied that the sects were a religious phenomenon at all and saw the spread of Protestant missions as the result of a US-promoted conspiracy to break the hegemony of the Church of Rome in that quintessentially Catholic continent. Numerous academic works undertaken in various disciplines of the social sciences (sociology, political science, anthropology), however, have judged this “conspiracy theoryµ – even if largely true – insufficient in explaining why evangelical missionary groups have been so successful in winning a substantial popular following in Latin America, given the criticism of the Protestant presence from both liberationist and conservative sides – two sides of the same coin, that is, the Catholic Church’s “intransigentµ opposition to modernity, the Reformation, and the privatization of faith. This essay tries to prove the opposite by following the complex transformation of this multifaceted anti-US and anti-sectarian Catholic prejudice in the recent history of Latin America. 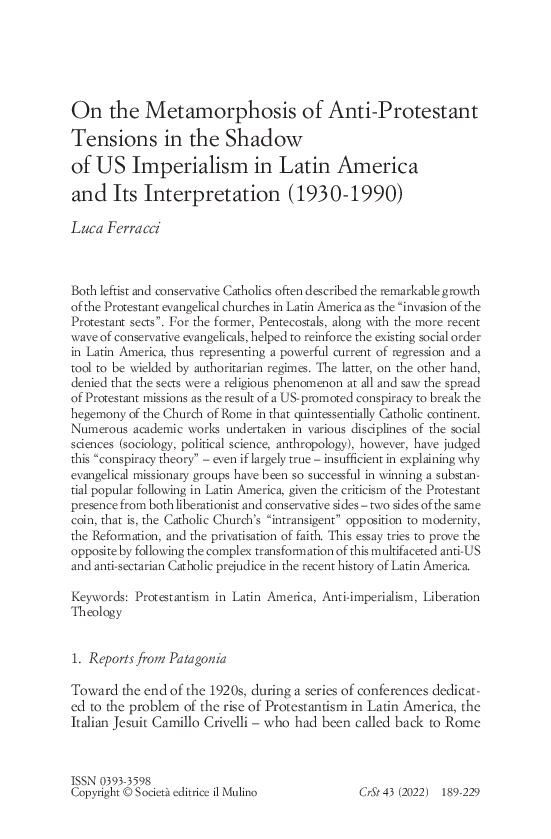