Fellini meditated for a long time, and on several occasions, to make a film of Dante’s inspiration: but he always stopped, declaring that «Dante is such a brilliant visual that you cannot add images to him». The same was said of Kafka, of whom America attracted him a lot, especially due to the presence of Brunelda, the progenitor of Fellini’s giantess women, as Milan Kundera and Paolo Fabbri, author of fundamental essays on Fellini’s imagination, guessed. Dante and Kafka populate Fellini’s comic and dreamlike Inferno, especially in the planned Journey by G. Mastorna, which through the script and a letter to Dino de Laurentiis turns out to be an “Beyondµ who is the ghost-shadow of the “Aldiquaµ. Dante sneaks into even the smallest details of Fellini’s films. In a famous scene from Amarcord Titta Biondi sneaks into the shop of the mammoth Tabaccaia-Brunelda and lifts it several times from the ground, in a grotesque replica of Pluto’s gesture, in Bernini’s masterpiece today in the Borghese Gallery, when he kidnaps Proserpina and drags her to the Underworld to make her queen. On the background wall, while the Tobacconist is almost in heavenly ecstasy, Fellini places an advertising poster of Fosforil with the face of Dante. Between irony and parody, the great poet seems to assist smiling at the madonna scene, a homage profanation that only Fellini could conceive. 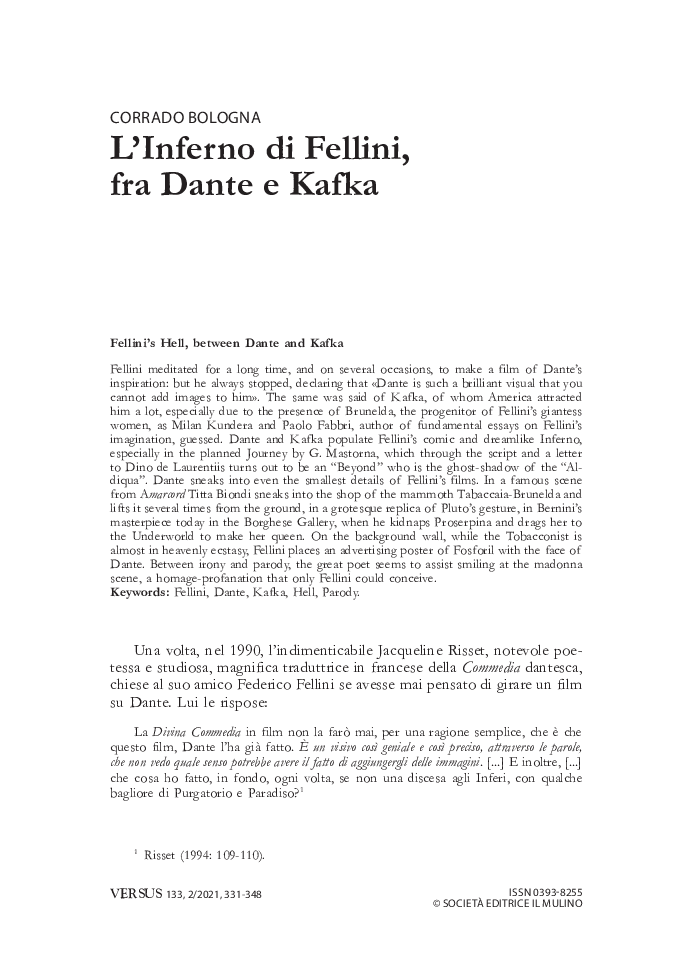