We propose to consider the dialogue between semiotics and social and human sciences, updated by the recent sanitary crisis. Taking Fabbri’s fundamental essay (1973) as our starting point, we were inspired by two of his texts: a) article «Collective identities» (2019) that he had entrusted to us for the translation into Russian and b) unpublished conference at the Moscow colloquium dedicated to the 90th birthday of Greimas, «From the analysis of myths to the semiotics of cultures: Greimas between Lévi-Strauss and Lotman» (2007). By the way of illustration, we will also quote the prophetic literary dystopia of Yevgeny Zamyatin, We, written in 1920. Collective identities are expressed in the first person plural (We), writes Fabbri, and the reflection on identity is on the «I» and its various figures. With the arrival of the pandemic, the metaphorical use of the mask (larvatus prodeo, Greimas 2018) becomes a real part of everyday life. The «We» are transformed: by confined space (Fontanille 2021), by infodemic discourse (Klinkenberg 2021), by the return to rituals, by the invention of new forms of digital cultural leisure (Merkoulova & Merkoulova 2021). It is the younger Generation Z (also known as the «Covid Generation» or «Sacrificed Generation») that represents the most striking example of the transformed «We». Thus, the discourse of sociologists and philosophers – «What does it mean to be 20 years old in a world where travel is restricted, learning is at a distance, relationships and friendships are blocked» (The UNESCO Courrier 2021) – finds the semiotic models exploring the new normality and the normalized «We» of the post-pandemic world (Cingolani 2021). 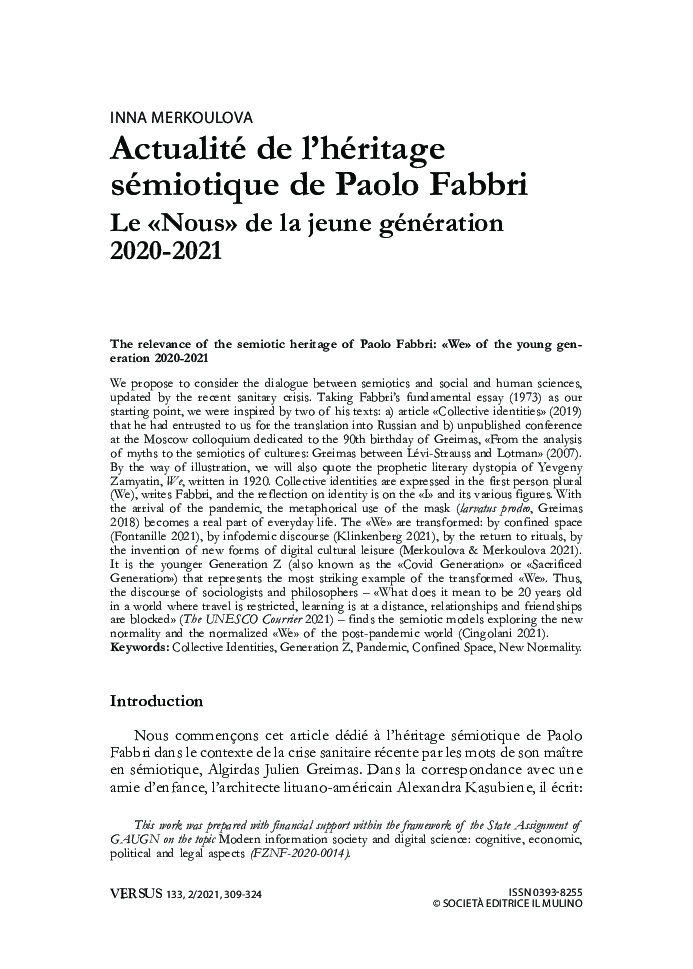