An essential junction for trying to account for the complexities and opportunities that have marked the dialectic between semiotics and the social sciences can certainly be identified in the encounter between the project of a theory of systems and processes of signification advanced by Paolo Fabbri and the work of Bruno Latour. If, on the one hand, Latour repeatedly and explicitly acknowledged the role of semiotics in the exploration of the paradoxes of modernity (1991; 2017), while claiming the need to simplify and extend the application of key notions such as actant and enunciation, on the other hand, Fabbri (1998; 2021) has recognized the fruitful impact of Latour’s perspective for a semiotic study of the social. If in the social sciences the contribution of semiotics in the development of actor network theory has been overall scarcely recognized, in the perspective of semiotics in recent years there have been increasing signs of a renewed interest in Latour’s work. Starting from Paolo Fabbri’s rejection of the opposition between a pure and an applied semiotics and from the invitation to rethink the study of signification as a descriptive methodology for social sciences, the contribution examines the emerging traits of a new mythology, that of smart objects, digital agents designed to promote the “naturalµ relationship with humans, to fit spontaneously into everyday life. The proliferation of objects designed for intensive and domestic use, equipped with intelligent vocal assistants, such as the widespread smart speakers, is thus revealed as a sociosemiotic phenomenon that urges to put back at the center of reflection notions such as those of interobjectivity and dispositive in which the dialogue with the work of Latour can be fruitful, against the background of a dialectic that invests the vocation of semiotics, that of a discipline that «does not count for how much it is new but for how much it becomes new» (Fabbri 1998: 97). 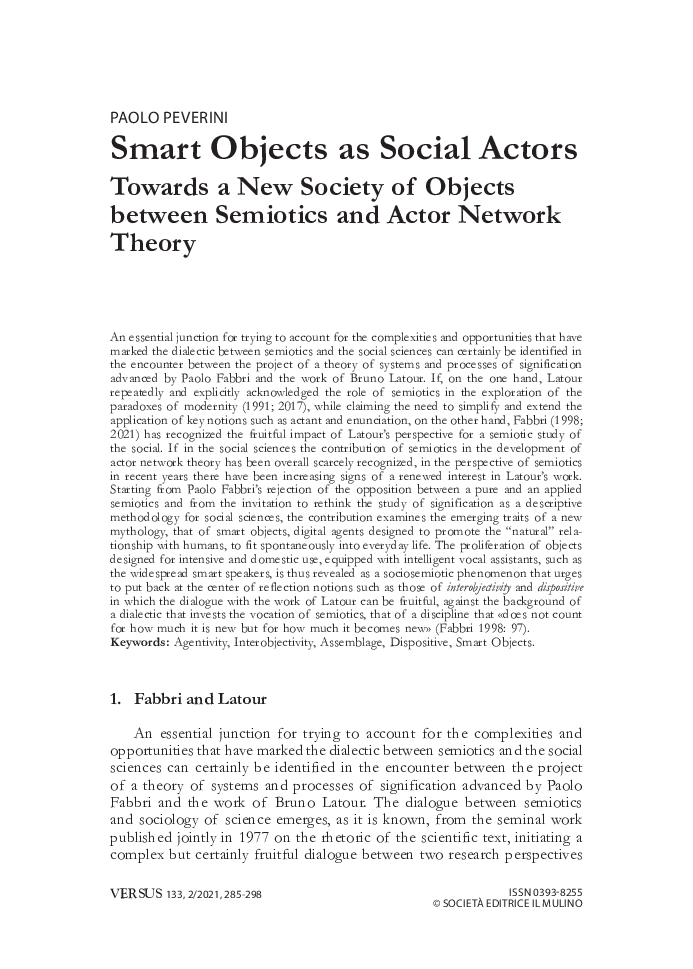