This paper focuses on the connection between the East-West dialogue and the return to the first beginning [Rückgang in den ersten Anfang] in M. Heidegger’s thinking. I will argue that the task of rethinking the Greek beginning and that of meeting the East belong in a meaningful hermeneutical circle: on the one side, the Rückgang in den ersten Anfang represents an essential condition for a dialogue with the East to be fulfilled; on the other side, the East-West dialogue can contribute itself and in a fundamental way to the re-petition of the first beginning, resulting into the same «step back» which lies at the core of it. In so doing, I will both reject L. Ma’s criticism of the Heideggerian East-West dialogue and reformulate J.L. Mehta’s interpretation of it: neither does the dialogue fail due to the Western thinking not being able to transcend itself, nor does it succeed due to both East and West reaching a region of regions beyond them. Rather, the dialogue succeeds within the frame of the first beginning and without any transcending, by that «opening up» which the Rückgang and the East-West dialogue concurrently involve. Some final remarks will be devoted to the role of language and to the challenges that language must face within this appropriating translation [Übersetzung]. 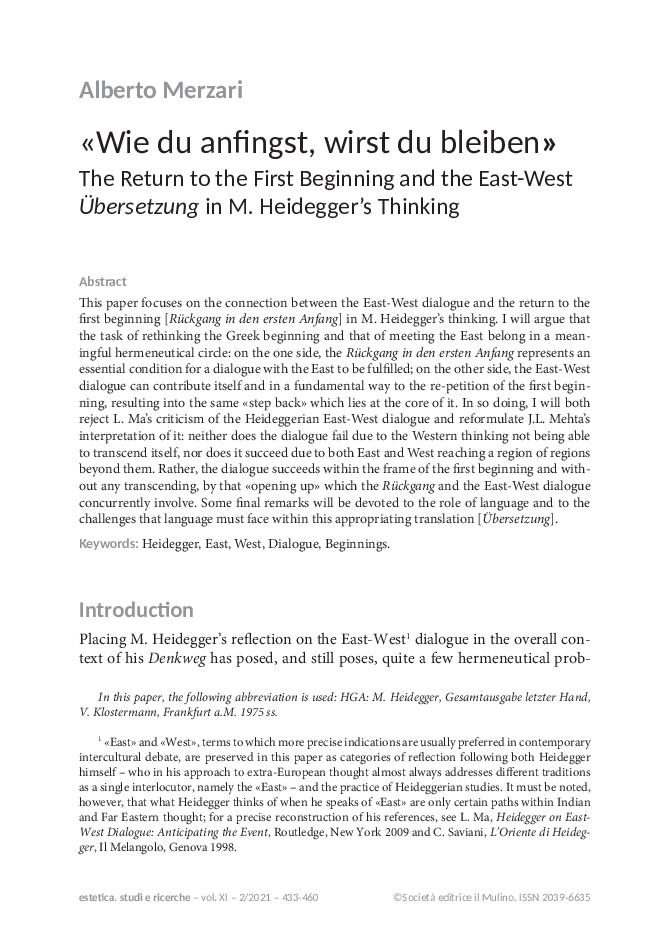