The historiography on Serbian-Italian relations has generally focused on the construction of the positive image of the other both on the Serbian and on the Italian side, during the long 19th century. Yet this paper shows that the anti-Slav discourse, that came to be a dominant part of the Italian irredentism by the 1880's, did have an impact on the Italian perceptions of Serbs and Serbia. In 1890, Edoardo Scarfoglio was among the first Italian representatives of what Maria Todorova called a "balkanist" discourse in travelogues still unconnected to the anti-Slav propaganda in the Upper Adriatic. It was, in fact, only after the military success in the Balkan wars that the Italian-language Triestine satirical press started to mock Serbs, specifically because of their "balkanist" traits. Still these attacks had much less to do with Serbs than with Slovenes and Croats of the Austrian Littoral who, by 1913, had started putting their hopes in South-Slav unification and, more specifically, on Serbia as the center of a future Yugoslav state. It was only in the works of intellectuals such as Virginio Gayda and Ruggero Fauro Timeus that anti-Serb stereotypes were fully integrated within the anti-Slav propaganda. In the works of these two authors a conspiracy theory was elaborated that connected Russia to Serbia, Montenegro and Bohemia, to the Slavs of the Upper Adriatic. Within this framework, all distinctiveness, be it regional, national or individual, came to be dissolved into a fully-fledged racist theory against the Slavs, paving the way for a totalitarian idea of society. 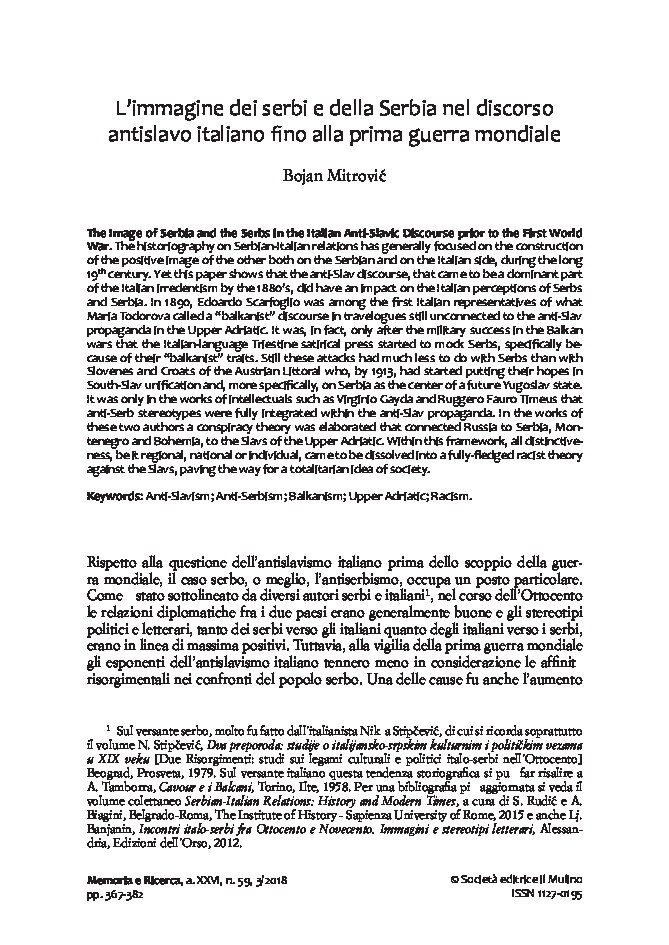