In the wide framework of a growing historiographical interest for the history of the Eighties, the authors are aimed at investigating the perception of Italy in the analysis of the international press, namely French, English and American, from a political, social and economic view point. In the collective imagination, Craxi's years - as the period from the first socialist government in 1983 until the beginning of the Tangentopoli scandal - were perceived as a golden age. Actually, analyzing the international press, a diverse image of Italy emerged from that of the Seventies: a prosperous and willing Italy replaced that of the previous decade. However, it must be said that this image was just partly the outcome of a different perception from the international press. The new business class behaved as an international political actor, coherently advertising the image of a new Italy, dynamic and active, although very well anchored to the main traditional Italian value: the family. At the same time, this perception was strengthened by the new socialist leadership, which was perceived not diversely from the rest of the Italian political establishment (unscrupulous and corrupted) a part from the fact that Craxi was presented as the men that Italy needed. Strong but moderate, able to end terrorism and to deal with Reagan in defending his own country, although confirming the Atlantic Alliance. The international press depicted a weak country that required (and deserved) a strong man, who could drag it from the quagmire that lasted since the Second World War's aftermath. An opinion that was not so far from the international understanding of Italy in the 1920s. 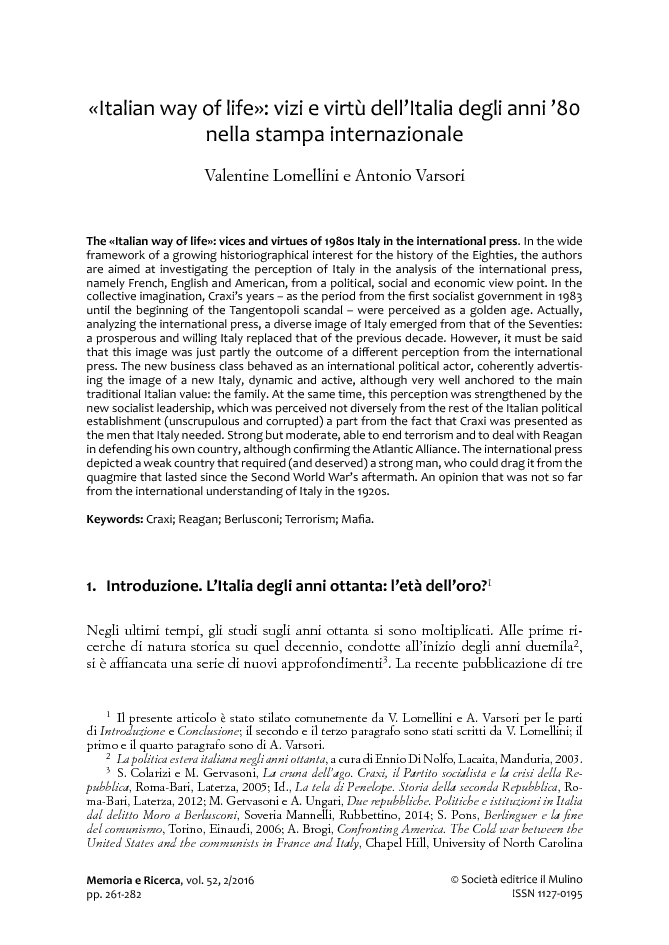