Twenty subjects for each of the following groups: Normal, Down, and Mentally Handicapped subjects (Non Down) of the same Mental Age (M = 6;6) were submitted to a definition task, using the italian version of the Stanford-Binet (L-M Form) Vocabulary Scale. A developmental model was used based on five levels of performance, from Level I (Non Verbal or No Responses) to Level V characterized by definitions in which both content and form are correct - mainly of the: "a ... x ... is a ... y ... that ..." type. According to this model, what leads subjects from the lowest to the highest level of definitional skill is not only their increasing conceptual knowledge but mainly their growing capacity to use syntactically correct and complex sentences to express that knowledge. Level II is characterized by the use of single words as definens; Level III, by the production of longer but syntactically incomplete structures; Level IV, by complete, i.e. selfsustaining utterances. According to the hypothesis: a) mentally handicapped subjects are expected to perform as the normal ones with the same mental age: b) given the young age of the subjects of the present study, a high amount of Level I and a low amount of Level IV and V responses are predicted; c) the intermediate levels (II and III) are expected to obtain the highest frequency of responses; d) mentally handicapped subjects, particularly the Down group, are expected to prefer the use of utterances requiring the simplest morphosyntactic structures. Data confirm the hypothesis; furthermore, they show a correlation between the definitional performance of both the mentally impaired groups and their I.Q., Mental Age and even Chronological Age. 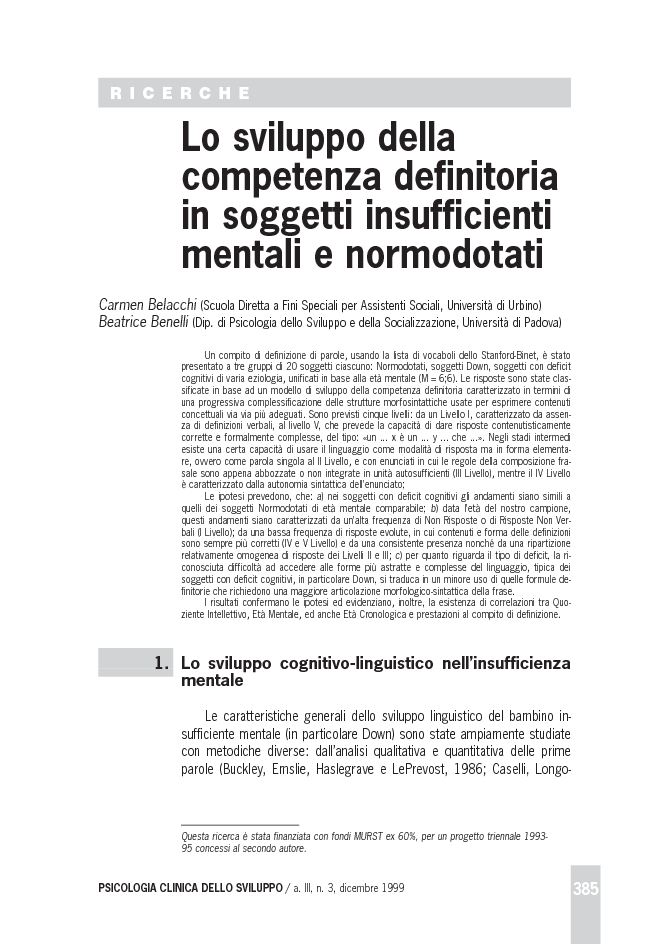