Two experiments to evaluate the understanding of the emotional meaning of facial expressions in people with autism are presented in this paper. In the first one three groups of eight subjects (autistic individuals, non-autistic mentally retarded individuals, children with normal development), matched on verbal mental age, were tested on a "deferred matching task". Two kinds of stimuli were used: happy and sad facial expressions (experimental condition) and geometrical designs selected from the Raven matrices (control condition). Seven out of the eight autistic subjects were also tested on a task in which they had to match individuals on the basis of their identity (further control condition). Differently from the typical simultaneous matching procedure the target picture was shortly presented and it was not visible when the sample pictures were shown to the subject, thus reducing the possible use of piecemeal processing analytic strategies based on the typical features of the facial expression of emotion for the solution of the task, without the understanding of its emotional meaning. Results showed a significantly worse performance (a lower number of correct responses) of autistic subjects with respect to both normal and Down subjects in the "facial expression" condition, but not in the "geometrical design" condition. Moreover, the performance of the seven autistic subjects in the "facial expression" condition was significantly worse than their performance in the "identity" condition, where they showed a level of correct responses comparable to that of the "geometrical design" condition. In the second experiment three other groups (autistic, Down, normal) of eight subjects, always matched on verbal mental age, were tested on an "hedonic evaluation task" based on an experimental approach called "sorting-by-preference". The task included two conditions: "facial expression" and "emotional situation". Each subject was presented with a picture of sad or happy face or of an emotional situation in which no people were involved, and requested to judge it as pleasant, unpleasant or "neutral". S's responses were classified as "congruent", "not congruent" or "indifferent". The aim of this second experiment was to compare the autistic and nonautistic subjects tendency to judge pleasantness/unpleasantness of a face using facial expression of emotion as a meaningful index. Statistical analysis showed a significant difference in the "hedonic evaluation task" betweeen the Down and the control group both for the "facial expression condition" and for the "emotional situation condition", due to the Down's lower rate of congruent choices. In contrast, there was a significant difference between the autistic and the control group only in the sorting of facial expressions, in which autistic children showed a lower rate of congruent choices, but not in the sorting of emotional situations. In summary, the basic findings of this study seem to reveal a specific difficulty of autistic individuals in the recognition of the emotional meaning of facial expressions, at least for happiness and sadness. 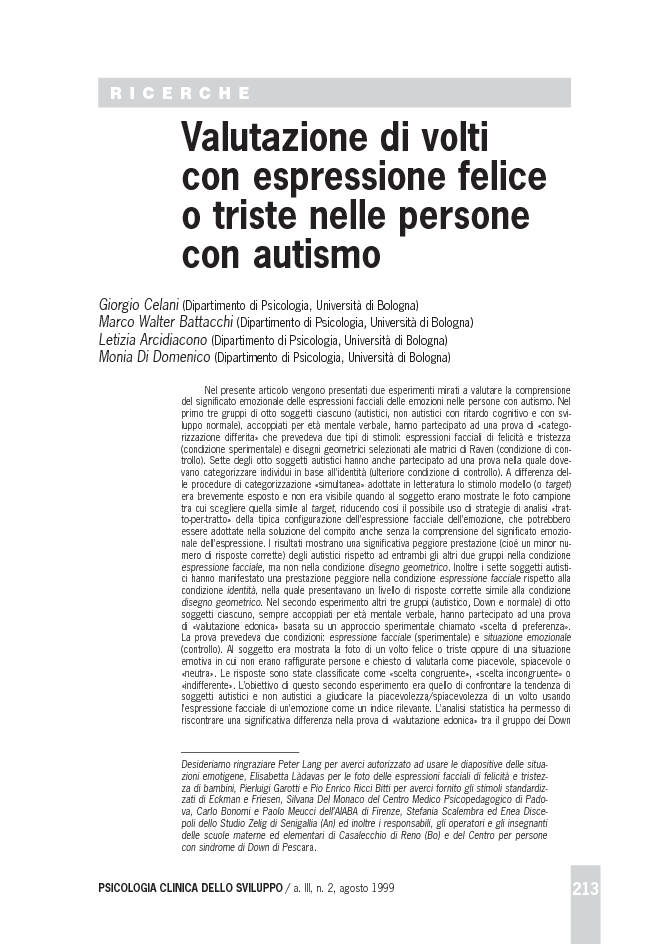