Introduction. Aim of this study is to analyze the associations between young adults attachment working models, alexithymia, end the cognitive style in terms of the field-dependence/ independence. The research involved 309 subjects (189 females and 120 males), aged 18 and 25. All the subjects were administered, the Experiences in Close Relationships (ECR) questionnaire in order to examine the attachment styles and the Toronto Alexithymia Scale (TAS-20), in order to measure the degree of alexithymia. In a subsample of 112 subjects (189 females and 120 males), between the ages of 19 and 24, the field dependence measurement was made by way of the Embedded Figure Test. Results show that the data confirms the hypothesis advanced. The dimensional components of ECR, anxiety and avoidances, predict both TAS-20 and field-dependence. Alexithymia, measured in terms of total scale of TAS-20, associated with an insecure style of attachment, and specifically with disorganization and avoidance. Furthermore, avoidance seems to be predictive, both of field-dependence and of the elevated degree of alexithymia. From the results, it is possible to argument in favour of the hypothesis that alexithymia and the difficulty in determining and describing the emotions are the outcome of having experimented caregivers that were thick-skinned and incapable of recognizing the requests for comfort and replying accordingly. Field-dependence/independence associates both to alexithymia and to styles of attachment, but attachment, and more specifically its avoidance component, seems to be mostly predictive of high levels of alexithymia and of a marked field-dependence. 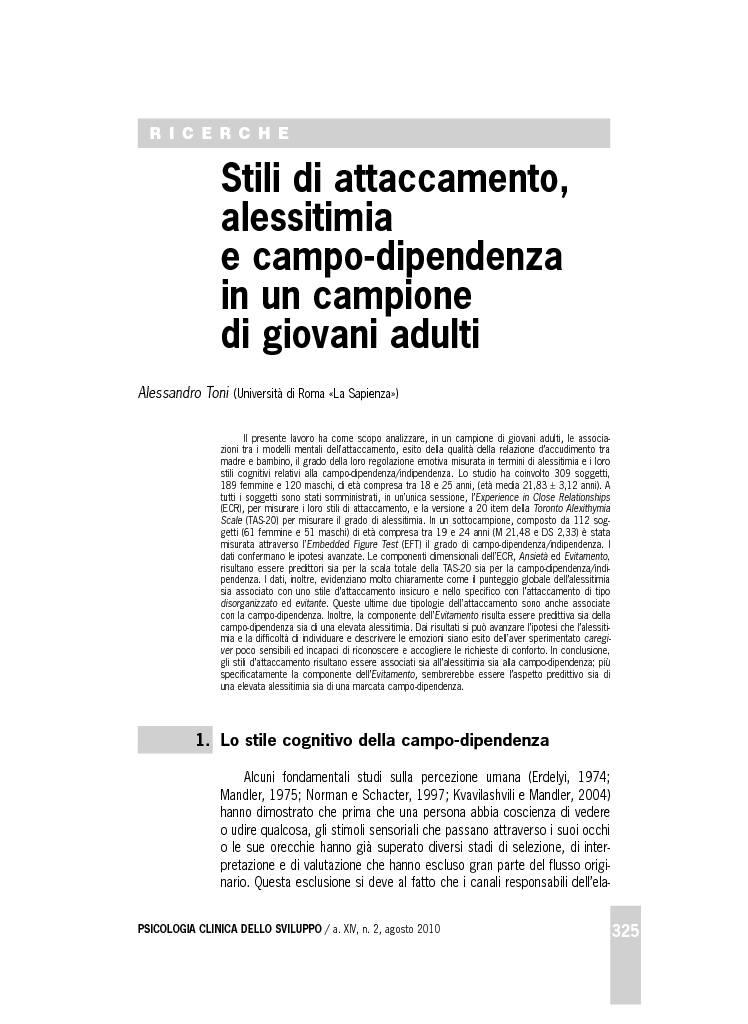