The spontaneous and prolific alliance between art and faith has lasted for so long that, as in the words of Chagall, «for centuries painters have dipped their brush into that coloured alphabet which is the Bible», considering it a sort of «iconographic atlas». At the root of this resort to art lies the very heart of the Christian message, that is the Incarnation, because, according to the Christian faith, in the face of Jesus Christ the invisible God is made visible. And it is this intertwining between theological motivations and artistic aspirations which gives rise to this alliance between faith and beauty, an alliance destined to last over the centuries with artistic events both at the highest level and in popular expression (like the ex-voto). It must be acknowledged that for a long time now, particularly during the last century, this alliance has been shattered. Art left the temple, the artists relegated the Bible to some dusty bookshelf taking the «secular» roads of contemporaneousness, fleeing from any figure, symbol or narrative. While at the same time the theologian has turned exclusively to systematic speculation believing there is no need for any signs or metaphors, consigning instead this huge symbolic repertoire to the storerooms of the past. However, the Church itself, in its highest authority, that is its pontifical magisterium, has resisted this drifting away into a resigned dyscrasia between art and faith. The Popes have wished to stimulate the ecclesiastical community and, among them, Pope Paul VI with his famous speech to the artists on 7 May 1964 proposing the restoration of a new alliance between art and faith should be remembered: an invitation taken up by Pope John Paul II during Easter 1999. Events which, together with numerous experiences at the local level of the dioceses and parishes, was inevitably destined to lead to the emblematic act of the Holy See pavilion at the LV Venice Biennale. It is not just the small State of the Vatican City that is on display, but the Holy See in all its universality. For this reason, among the many possibilities, it was decided to have just a trio of artists of different nationalities: the American, Lawrence Carroll, the Czech photographer, Josef Koudelka and the «Studio Azzuro» choir school of an Italian, Paolo Rosa to interpret the text of the first eleven chapters of the Genesis. In these the figures, symbols, primary and permanent events of humanity are encountered, naturally interpreted according to the hermeneutics of faith. These will be flanked, almost as an important witness to the art-faith dialogue - we venture to say «fuori concorso» - by an astonishing, fascinating and hitherto almost unknown painted ceramic Via Crucis by Lucio Fontana. 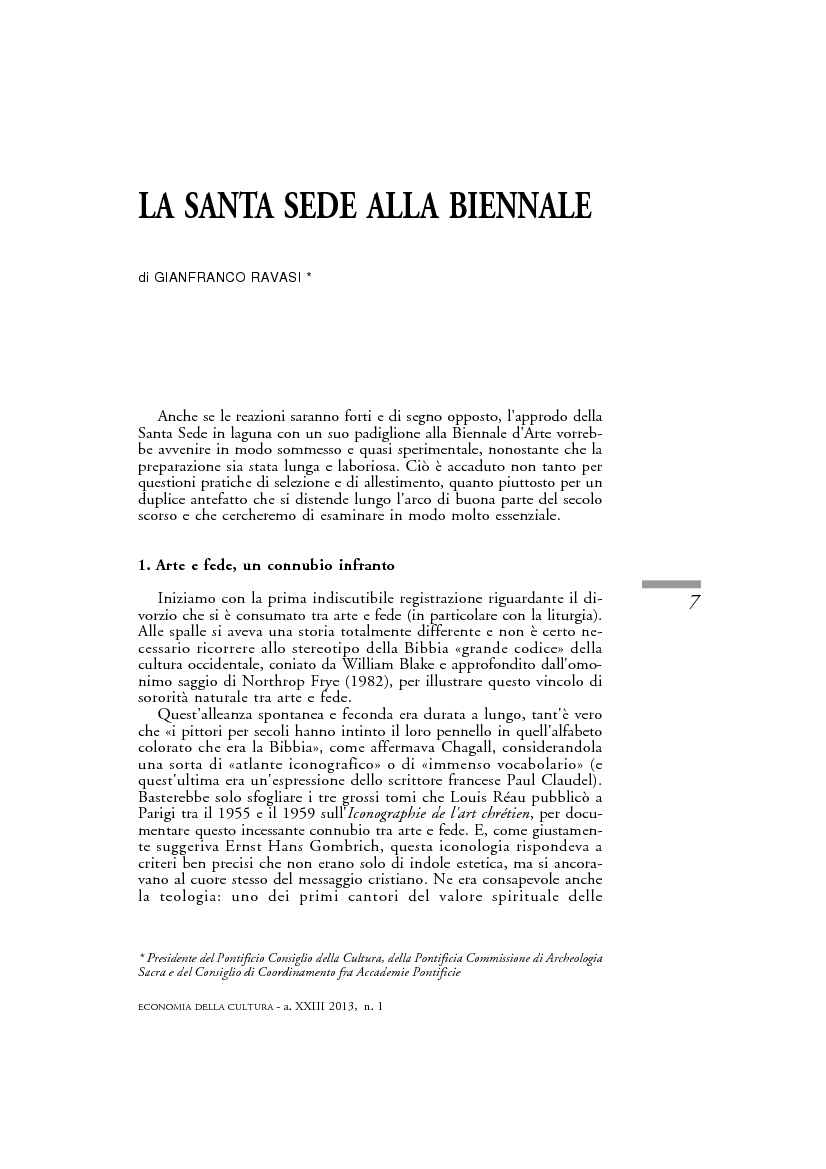