Renato Nicolini, a former cultural commissioner of the Rome municipality between 1976 and 1985, passed away at the beginning of August. This revue honours his innovative cultural work and his memory bringing out his speech (first published by Guida Editori, Napoli: see reference), at a conference promoted by the Rome municipality in 1984 on Cultural policies in the United States and Italy: divergences and convergences. The conference saw the participation - along with the representatives of the Italian Ministry for Cultural Heritage and of local administrators and experts - of representatives of the National Endowment for the Arts Research Division, of local Arts Councils, of the Brooklyn Academy of Music, as well as of academics like Joseph La Palombara, Stephen Benedict and Mark Schuster. Refusing any cultural or political model, and conscious of the problematic role of government in this field, in his contribution Nicolini suggests to consider the public cultural policies realized in different metropolises as experiences with their specific features that can be traced back to a type of cultural policy. In this perspective he points out some typological elements characterising his experience, and notably the major achievements of his «Roman summers»: their democratic, not pedagogic or excluding, nature, aimed at unusual mixtures of different cultural genres and different publics; its low cost and «ephemeral» (versus «permanent» character) as a first step towards the upgrading of cultural demand and the, more expensive, renewal of cultural infrastructures; the dimension of people involved (smaller than in New York's Central Park experience); the pursuit of new ways of public/private partnership, where government (approaching the American model) should act more as a catalyst and a service provider than a direct source of funding. Always present, in Nicolini's remarks, are also his political and socialising aims to create opportunities of festive meetings in the evenings and nights of everyday life in a time of hard social and political violence, fostering a community experience for various individuals living in a scattered metropolis as Rome. Thus reversing the then popular «cultural decentralisation model» by proposing the very historic centre, the ancient archaeological as well as the Renaissance and Baroque Rome, as scenes for different shared cultural experiences in the search of an urban (common) identity. 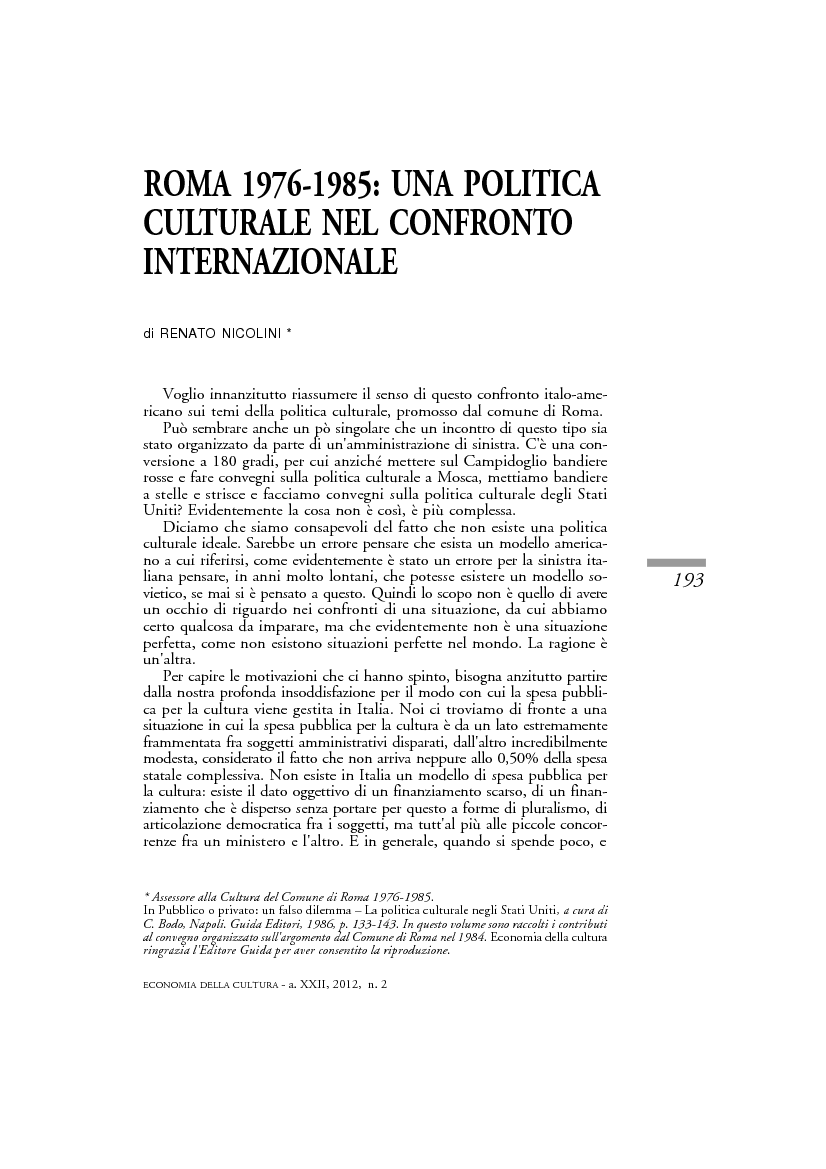