Some have suggested the current papal office represents a newly evolved, digital literate and media engaged entity. This has led to framing the current curia as a «digital papacy». Under the oversight of Pope Francis the Internet now plays a vital role, not only in facilitating the dissemination of religious information and teachings for the Catholic church, but in how it seeks to represent itself in a globally networked world. Since the instillation of Pope Francis, the Roman curia of the Catholic Church has increasingly embraced social media, like Instagram and Twitter, as resources for spiritual and informational dissemination. The further refining of digital resources such as Vatican.va, have been credited to raising the prominence of Pope Francis’ digital profile. Pope Francis’ re-working of the Curia Communication Offices and structures also shows his close attention to the role media plays in the Church. Such innovation have been credited with the creation of a digital papacy, where the papal office is shown as being more seriously invested and strategically aware of how new media technologies can and should be leveraged for religious purpose for the sake of the Church’s mission. However, this paper seeks to investigate the claim that the current papal office has indeed institute a new approach to media in a digital age, and interrogate the claim that a unique digital papacy currently exists. By comparing Pope Francis’ media use and strategies to that of the two previous papal office we begin to see that the papal office does now exist and function within a unique media moment – readily embracing digital media – and it takes part of a longer historic trajectory of media use and understanding in the Vatican. In this paper we argue that while the current media work of Pope Francis can be described as a digital papacy, it is only because of the way it emulates and operates within a broader theological strategy grounded in six or more decades of theological teaching on Social Communication within the Church. 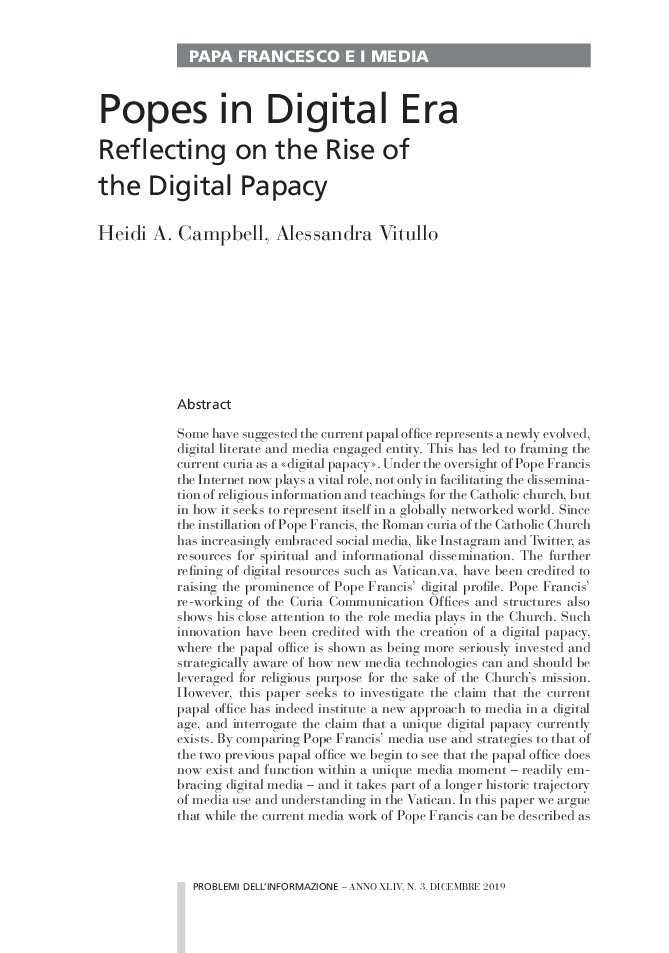