The paper principally deals with the problems related to the political nature of the government’s appeal in the control of constitutionality, starting from a recent warning addressed by the Court to the Government to a coherent and reasonable exercise of this appeal against the regional laws in the matter of arrangement of the estimated budget (Constitutional Court, judgment n. 107/2016). The precedent of the Court is the starting point for a broader reflection on the procedural implications arising from the attribution of the power of initiative to collegial and political bodies. The Author, therefore, after reconstructing the previous legislation and constitutional jurisprudence, formulates a theoretical proposal: in contrast with the highly discretionary nature of the impulse act, which is explicitly confirmed in the letter of the Constitution and of the law n. 87/1953, there is the need for its operating methods to be based on consistency and reasonableness, in order to guarantee the ultimate objective of the constitutionality syndicate, namely the protection of the constitutional integrity of the legal system. Given the aforementioned theoretical bases, the Author inquires about the tools available to the Court – inadmissibility of the appeal, self-claim of the question, consequential illegitimacy towards the non-challenged regional norms – in order to bring the procedural conduct of the Government to consistency and reasonableness in the appeal against regional laws. 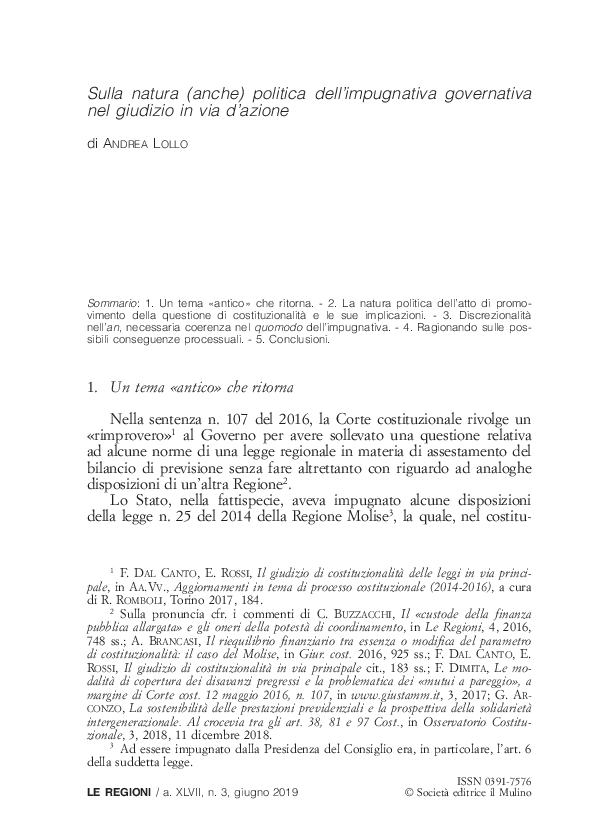