This articles shows that while environmental shocks can lead to major institutional change, this change typically is not radical. Even in situations of institutional breakdown due to violent and disruptive events, it is possible to find institutional persistence which constrains and shapes the process of change. Focusing on the nuclear accident of Three Mile Island, the article takes an historical perspective paying attention both to the long-term institutional implications of the accident and to its historical roots. It inquires forms of major institutional change which originated from the nuclear accident, but have revealed themselves as consistent with institutional persistence. In this sense, institutional change and institutional persistence are potrayed more as coexisting than as contrasting. The U.S. Nuclear Regulatory Commission is the main institution investigated in the articled. The NRC represents a case of institutional continuity in itself. It was estabilished in 1974, but it inherited its structure, staff and regulatory system from its predecessor, the Atomic Energy Commission established in 1946. The article takes a look at the process of the NRC's transformation that developed as a result of TMI. That transformation has been constrained and mediated by the AEC's institutional legacy. A second institution the paper focuses on is the nuclear safety regulation in itself. The whole concept of nuclear safety, its culture and approach have changed because of TMI. Yet, even this change innovates persistent institutional arrangements which originated in the early days of nuclear power development. 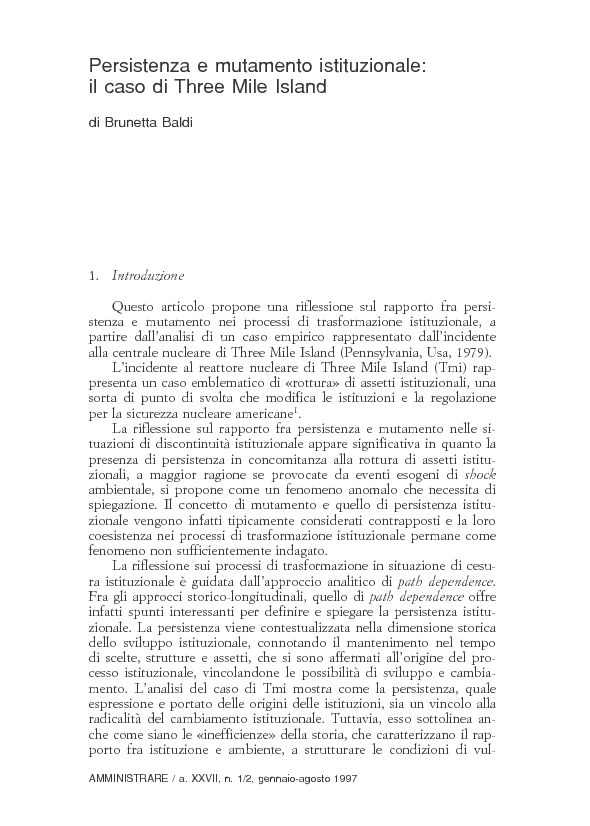