Alternative Dispute Resolution (ADR), especially mediation and arbitration, has a long tradition in U.S. labour law. For well over 100 years, mediation has been used as a means to avoid strikes and peacefully resolve collective labour disputes. More recently, the use of mediation has expanded to individual employment disputes, often involving statutory discrimination claims. As this shift has occurred, questions have arisen about the fairness of mediation in such situations, particularly given the power imbalance that often exists between a single employee and an employer. Unions’ involvement in the mediation process would be a natural solution to correct this imbalance and thereby make it fairer and more effective. At the same time, such involvement may pose some risks and costs to the union. These could be the additional expense and related loss of resources in assisting employees to mediate their claims, and potential legal exposure to additional breach of duty of fair representation claims (under which unions have a duty to fairly represent employees, and not arbitrarily, discriminatorily or in bad faith). This article attempts to reconcile these costs and benefits, suggests best practices, and ultimately concludes that unions have an essential role in mediating both collective and individual labour disputes in the U.S. 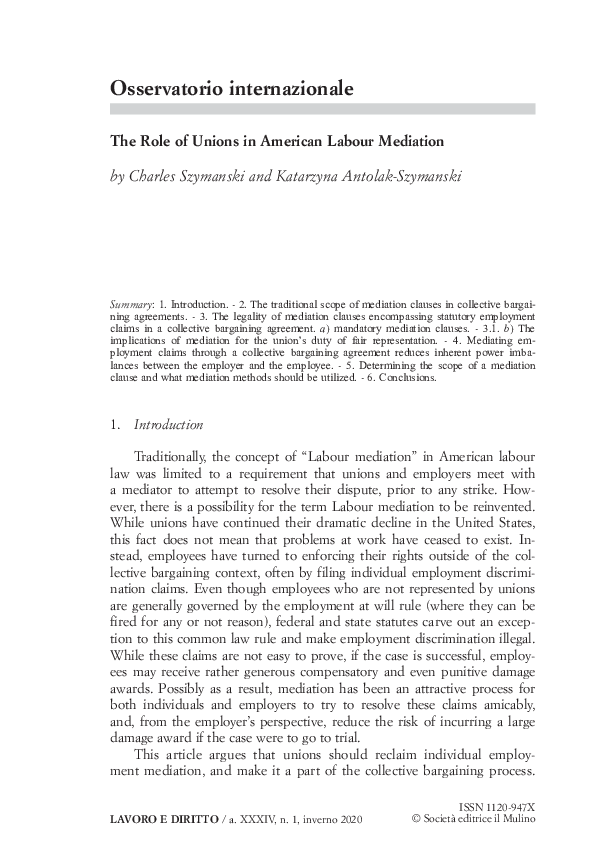