When the fascist regime developed its intentional assault on the territory of industrial and labour relations, this territory itself was almost unknown in legal culture. Also for this reason, the regime could seize the matter in only twelve months with some Labour Law choices that would turn out to be the winners. The April 1926 Act transformed the collective Labour Law in quite an other thing. The individual Labour Law suffered a less radical fate. It had been "legified" only as far as new collective agreements were concerned, which means that the discipline of labour relationships in enterprises kept up its roots in agreements. From this point of view one can say that fascist corporatism has penalized individual Labour Law only indirectly, by removing the possibility of self-determination, which can be assured only by industrial conflict (when it is free and not criminalized). Nevertheless, the fascist corporatism exerted an influence - even a positive one - on future development of individual Labour Law, which still represents a historiographical problem. The "Carta del lavoro", a political text approved by the "Gran Consiglio del Fascismo" in 1927 that had not any formal legal value till 1941, had advanced the program of extending the rules for white-collar workers, enacted in 1926, to all the workers. This promise had not been kept, and has caused problems for a long time, but historiography - both legal and general - has never deeply studied its popular perception and consequences. The regime obtained a less disputable success on fields, close to labour relationship, on which commoners could appreciate the satisfaction of old expectations, as were founded in the 1927 "Carta del lavoro". Actually, the regime reorganized, rationalized and enriched the whole of insurance-based social protection that constitutes the founding core of modern welfare states. Even as regards this peculiar area one must recognize the limits, due to superficiality, of modern historiography. Usually it considers only that the social policy of the regime was necessary to the purpose of obtaining a certain degree of consent of the working class as a compensation for the abolition of collective - union, strike, bargaining - freedom. Furthermore, there was the consciousness of the need to link the rules of the work and the quality of the extrawork life as a condition for "Corporative Labour Law" to contribute to the modernization of society. In any case, this modernization took place in the contest of a non-democratic society and therefore it did not compensate the workers for the humiliations they suffered as citizens. 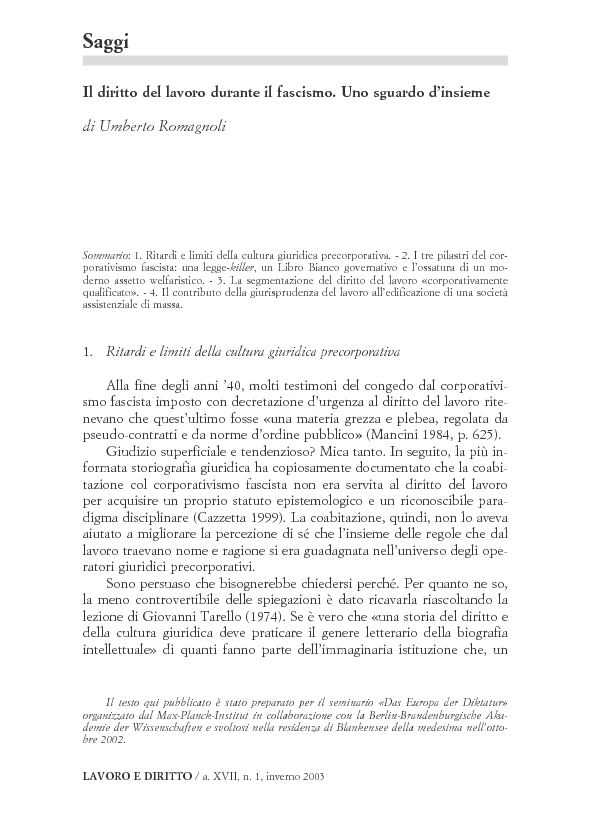