The essay, within a rereading of the classics of the Italian Labour Law, analyzes Giorgio Ghezzi's monography "The default of the creditor in the labour contract". After underlining the importance of rereading of classics in order to have an historical approach to the development of the doctrine and delineating the purposes of the article, the author describes in general the default of the creditor in Civil and Labour Law. Then there is the analysis of some specific features of the monography (relationships with the Italian and German civil law doctrine, the innovation of the juridical method compared to the traditional dogmatic one, the absence of whatever reference to "Law and Economics"). Afterwards the author points out the more innovative characteristics of the monography (in particular the relationships between the default of the creditor and the supervening impossibility of performance) and the influence that the book has had on the scientific debate. After that, there is the analysis of some criticism which can be expressed towards Ghezzi's interpretation and the study of the different solutions adopted by the doctrine. Finally, the essay considers the influence which Ghezzi's monography exercised on the following doctrine and jurisprudence (in particular regarding strikes) and the evolution of the special legislation which tends to reduce the regulation of the default of the creditor discipline established by the Italian civil code. 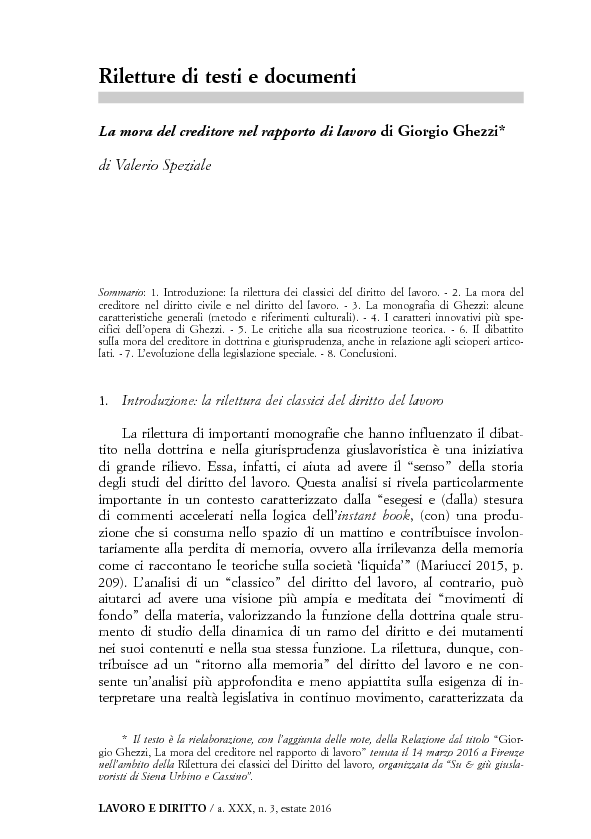