The paper analyzes the role of judicial decisions in defining a set of rules limiting the interpretation of both judges and legal scholars. According to certain positive norms and a long juristic tradition, the interpretation of legal texts is not free - it is limited by a number of legal criteria (the literal meaning, the intention of the lawgivers etc.), which however are often not followed by judges. After examining the reasons of such a decline in interpretive practice (including the absence of a common frame of legal values as well as the spread of theories which deny the very possibility of having applicable rules of interpretation), the author maintains that a possible solution to the problem could be found in the "living law" (the law in force) about interpretation, as defined by the jurisprudence of the Supreme Court. As a matter of fact, the Italian "Corte di Cassazione", by a constant jurisprudential trend, has established a set of rules (e.g., the prevalence of the literal over other meanings) which should bind judges - they should follow such rules and, whenever they do not want to apply them, they ought to justify the chosen alternative rules. The application of such a "living law" should reduce the freedom of judges to give the law whatever meaning they like, complying with a fundamental requirement of the Rule of law - the necessity that identical or similar cases are ruled by the same legal regulation. 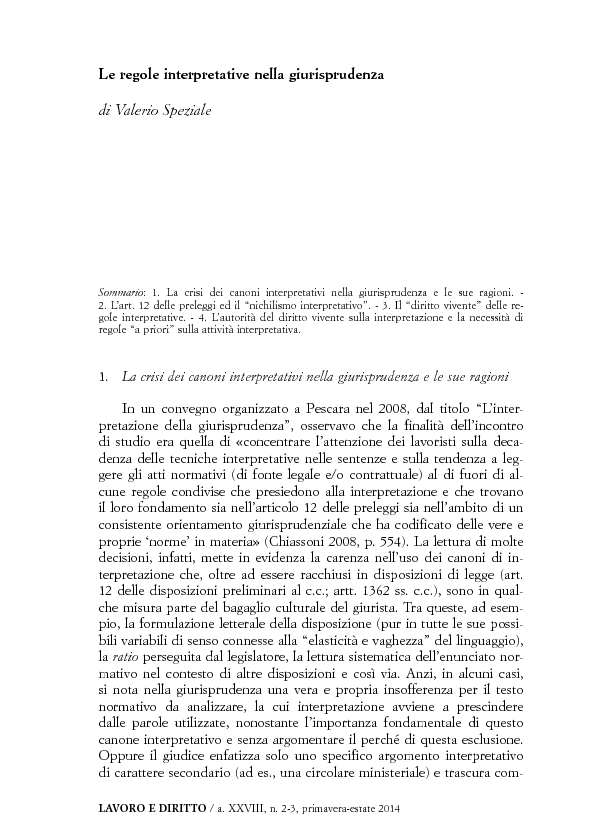