Within academic, political but, above all, trade union circles, the issue of minimum wage provision has become a major area of debate, both in Europe and beyond. Fears that globalisation is promoting social dumping, a growth in atypical and precarious work, as well, as a rise in inequality and poverty, even among those in work, has made the consideration of more effective methods of combating these trends imperative. Minimum wage provision has become a fundamental socio-political tool in the battle against poverty and is a feature of most advanced political systems. In the majority of countries in Europe the minimum wage has been established through legislation, however in a significant minority, including Italy, it has been regulated through collective bargaining. Bringing together the constitutional principle of wages that are proportionate and sufficient, with legal rulings on collectively agreed minimum wages, has, at least in Italy, resulted in a high level of collective bargaining coverage and a comparatively high level of minimum wage. The article describes the various regulatory systems, analyses the available data, as well as investigating the position of the trade unions on the issue at national and European level. It concludes that no one system is necessarily better than the other. The system of legal regulation guarantees more effective and universal coverage, compared to the collective bargaining one, but at a lower minimum level and one that is more dependent on the political climate of the time. The collective bargaining system can bypass this restriction but has to work within a labour market that is more and more fragmented and atypical; a declining trade union movement; and, in relation to Italy, a high level of undeclared work. In the German case, its trade union movement has decided to support the demand for a legal national minimum wage. The issue to consider is whether, as in the Italian case and facing no less a level of threat, they will be able to retain their position on collective bargaining. 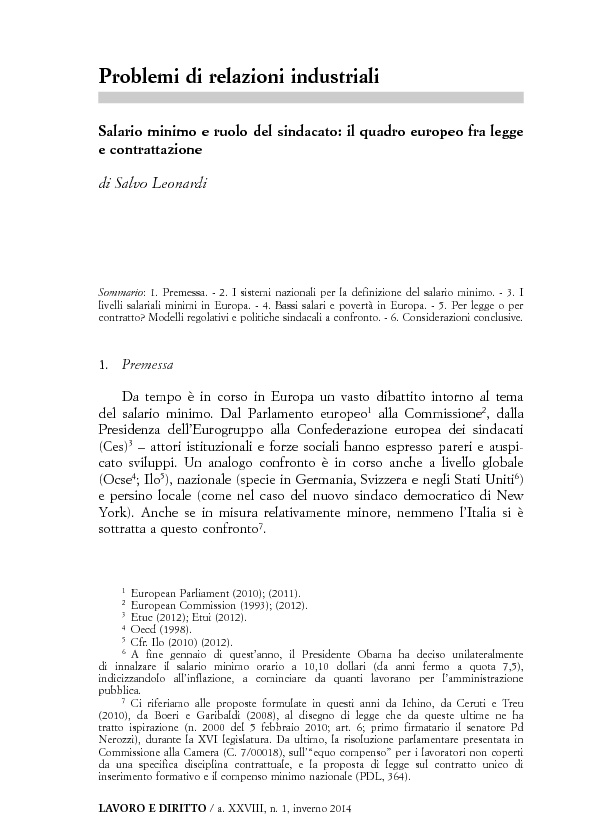