Taking as starting points a comparative outlook of the situation of labour all over the world and of the most recent Italian vicissitudes, with particular reference to labour legislation, the author sketches the issues which he considers the most important to trigger a positive evolution of labour law. The first point is a new legislation on unions representation and participation, inspired by principles of democratic representation based on numbers (of members and of votes gained in polls for plant level representative bodies Rsu), aimed at bargaining and stipulating binding erga omnes collective agreements. As regards the labour market and particularly the unemployment, the focus is on the reduction of fiscal burden on open-end contracts and the welfare benefits for job seekers. A further point is the necessity to discard the pattern, which has been dominant along the last decay or more, of job flexibility as instrument of employability and of contrast to unemployment. In any case, the aforementioned provision needs effective tools of administrative implementation. Public employment too needs to be reconsidered, particularly spreading the regulation of private employment to all public employees, but in the frame of deep administrative and institutional reform. In general, labour law needs a deep simplification, after a long period in which reforms over reforms have created an enormous amount of rules, difficult to be applied and even precisely known. The final paragraph, under the title "before act, then theorize", invites labour-lawyers to reflect about the most real nature of labour law. 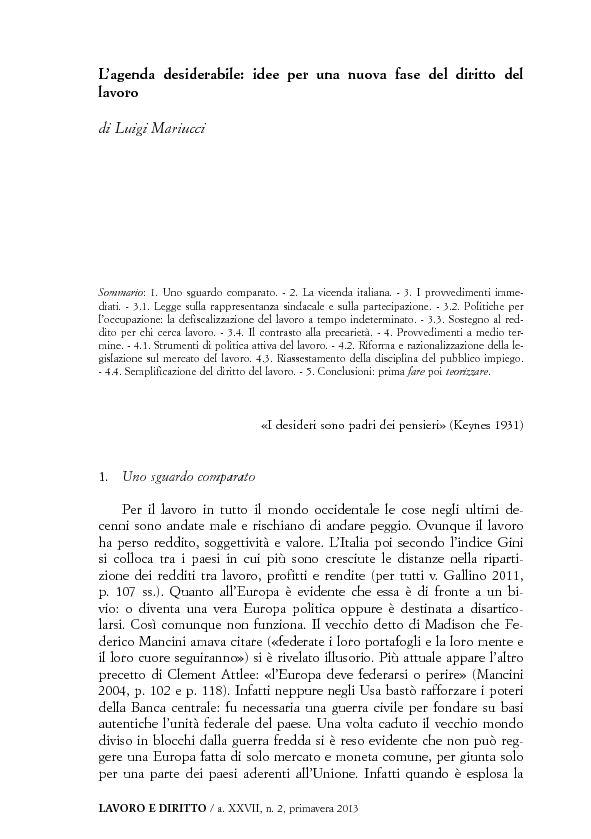