The paper is a reply to the important questions addressed by L. Mariucci (LD, 2/97) to labour law scholars on the moving spirit of modern labour law. Without pretending to give an actual answer about the fortunes of labour law, the paper essays to point out the purpose of labour law, in the "golden sixties" as well as today. According to the Author, labour law has not lost his special "spirit", and the academic community is not a brontosaurs' community. However, if in the '60s (almost) everyone was working to build labour law, in the '90s we must face the upkeep of the building: a less attractive work, of course. Moreover, the Author does not agree with the mission assigned by L. Mariucci to labour law, that is an instrument to organize "the society on the whole". On one hand, labour law has to do a "marketing research" in order to select the actual today's requests coming from the society which can be complied with by labour law. On the other hand, labour law should change its approach to "the society on the whole", taking into account the needs of the economic system as well as the role of politics, without any fear and/or snobbery. The Author - giving forward some examples about the need of work's flexibility - stresses the singular relationship (love/hate) between labour law and economics. The reshaping of the protection can help to perform a more equitable share of the few work's opportunities among the workers ("insiders") and the unemployed ("outsiders"). However, as the Author tries to show, the decline of the global labour force cannot be coped with a cut in the "protection" given by labour law to workers. A serious alternative to the "jobless growth" (Rifkin) is not a "labourlawless growth", but something else to be discussed among the labour law scholars, working togheter with the economists. 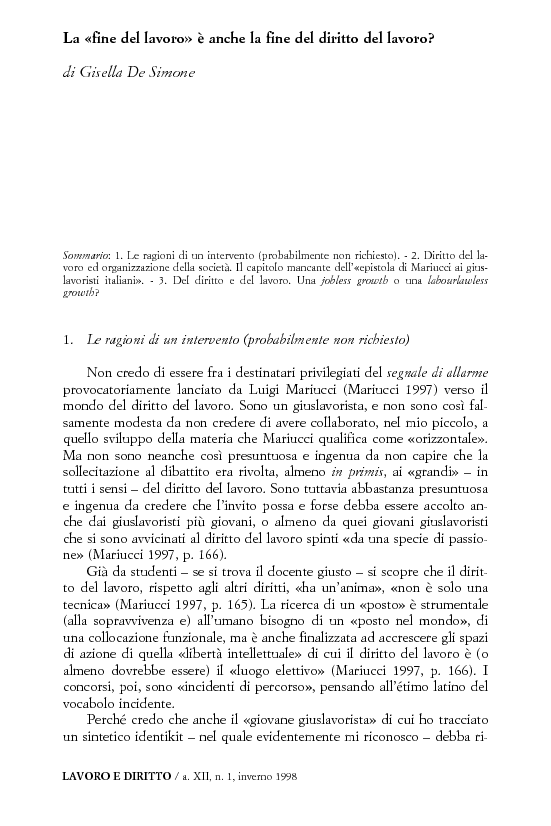