Moving from the question "why everyone nowadays says that Italy needs to increase the women' participation in the labour markets?", the Author considers the different possible underlying reasons, the ethical case vs. the business case. As one of the goals targeted by the present Government is just the enhancing of women' employment, the essay tries to evaluate if and how the recent policies engaged by the Labour Minister Fornero are consistent with this intention and differ from the ones of the past Government. The essay focuses on the recent Act n. 92/2012, a deep reform of the labour relationships as well as of the labour market, that directly or indirectly affects women. The main issues considered are the important changes in the dismissal law (Art. 18 Act. n. 300/1970, Statuto dei lavoratori), whose gender character is enlightened. According to the Author, the uncertain distinction between unjustified dismissals and discriminatory dismissals, together with the increased dramatic differences in the protection grant by Act n. 92/2012 in the two cases, could reduce the real protection against dismissals based on grounds of sex or maternity, on one hand, and could fail to increase the women' employment on the other hand. 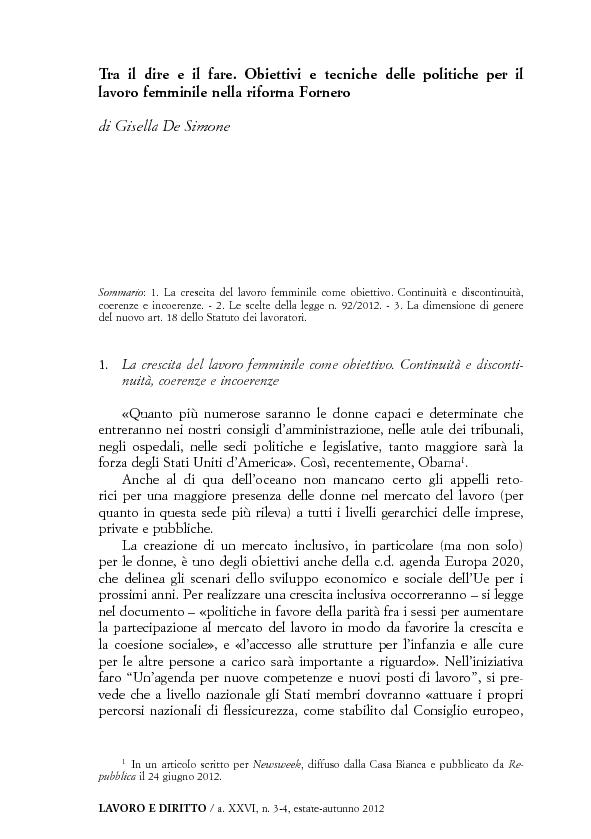