The Author envisages the topic of pay from an Eu perspective by verifying how the exclusion of competence, which is still stated by the Treaties, combines with the principle of equal pay for women and men, which was already enshrined in the Treaty of Rome. The analysis leads to interesting considerations. First of all, the issue seems to run the blind track of competence exclusion not only because of a choice of not interfering with its determination, except for the equality principle, but also because the issue reaches an European dimension when referring to trans-national phenomena (such as, posting of workers and right to minimum wage). Most of all, this highlights the key role of equal treatment and of the prohibitions of discriminations, which have been progressively extended to a plurality of factors protected by the legal system and to the so called atypical jobs. The analysis of the proposal for a directive on gender pay gap raises the critical aspects that collective bargaining implies. In fact, if pay is the typical subject of collective bargaining and if the systems of classification and professional placement are ones of its closest corollaries, the gender pay gap is its direct outcome. This perspective necessarily implies the topic of the limits to contractual autonomy stemming from fundamental principles. The general rehearsals on this matter can be found in the "contract of inserimento", as the law itself permits an exemption from the equal treatment principle. The point of arrival, at the moment, is represented by the omnivorous exception of art. 8 of the financial act of September 2011. 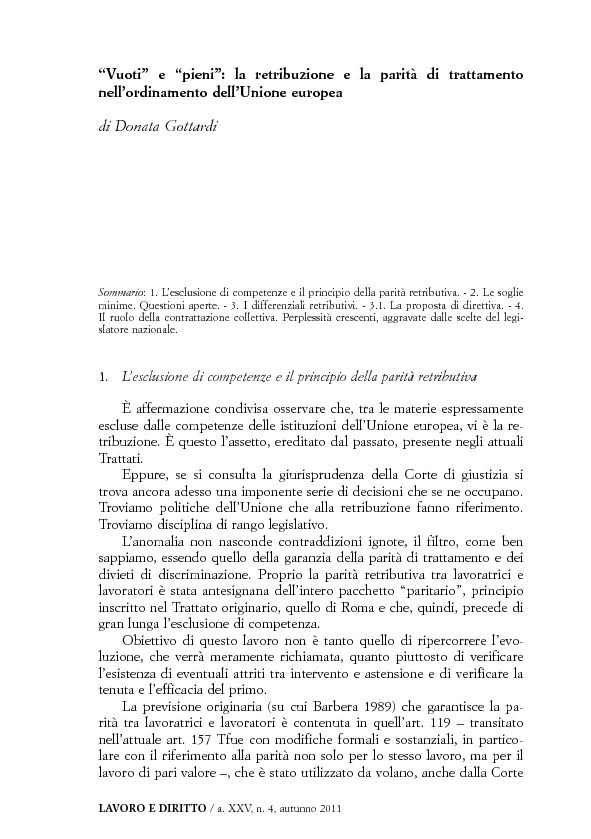