The essay answers to the key questions raised by the Fiat-Chrysler affair, hereby reassembled according not to an industrial relations logic, but within the context of the financial capitalism dominating the entire complex story. The theoretical framework that best suits the story seems to be represented by the public-private couple. After describing the characteristics of the World Class Manifacturing, the Author focuses on the buyout of Chrysler by Fiat and on the involvement of the Voluntary Employees'Beneficiary Association. The theoretical framework where the rediscovery of the organisational question and of its regulative issues in Italy and in the United States can be recomposed is not the one traced by the European Union, whose law seems to be too far in the case in point. In respect to the opinions elaborated by the doctrine with regard to the relationship between collective protection and global economic competition, the Fiat affair shows two specific peculiarities. The first one relates to the level of governance of supra-national or global integration of cars production: the governance is local, company-based; the second consideration regards the competitive push sparked among the different local bases of the car multinational company. If the theory of competitive advantages is applied to the transatlantic company-level collective bargaining, the Fiat affair highlights that workers rights are not the only one affected by social dumping: competition is also affected by general welfare and financial reasons that appear to mark its destiny. 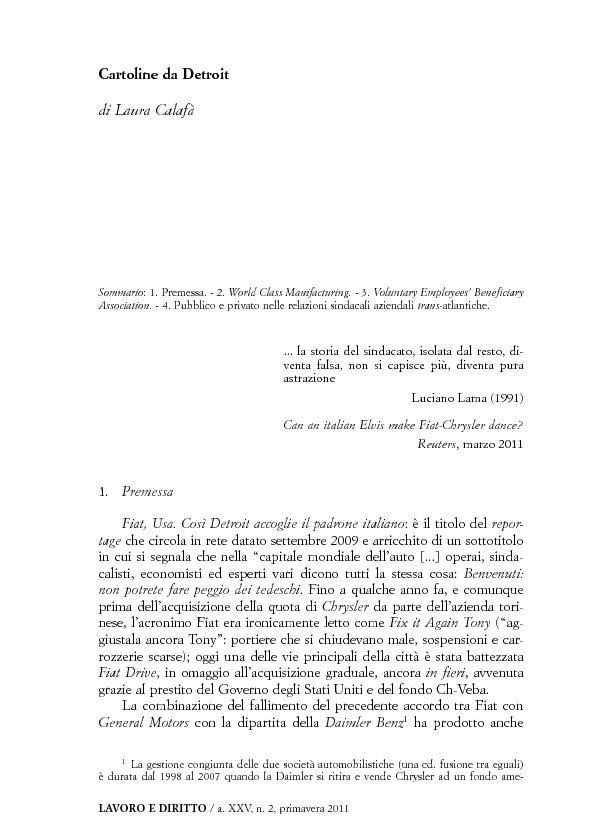