After briefly revisiting some significant moments in 100-year history of industrial relations at Fiat, the author examines recent episodes in collective bargaining intended to radically transform individual and collective employment relationships, consistent with the multinational strategy of Fiat Ceo Sergio Marchionne. These collective agreements - un-signed by Cgil (Fiom), the metalworkerss union - are next deeply and critically examined, particularly the norms governing the individual right to strike. The author then considers the impact on the collective bargaining system resulting from the recent "separated" agreements (not signed the major union, Fiom, or, at inter-branch level, by Cgil) and the Fiat agreements. Finally he discusses the questions, and anomalies, posed by the workers'use of a "referendum" to validate the agreements themselves, which raises the issue of the "representativeness" of the unions involved. This is an old issue and the author deals critically with a recent proposal. The author concludes by situating the Fiat case within the context of global competition and advocates an alternate approach: improving working conditions in developing countries instead of decreasing those of workers in "old" industrialized ones. As suggested by the title, the current direction represents a return to past, which is the opposite of what the country needs today. 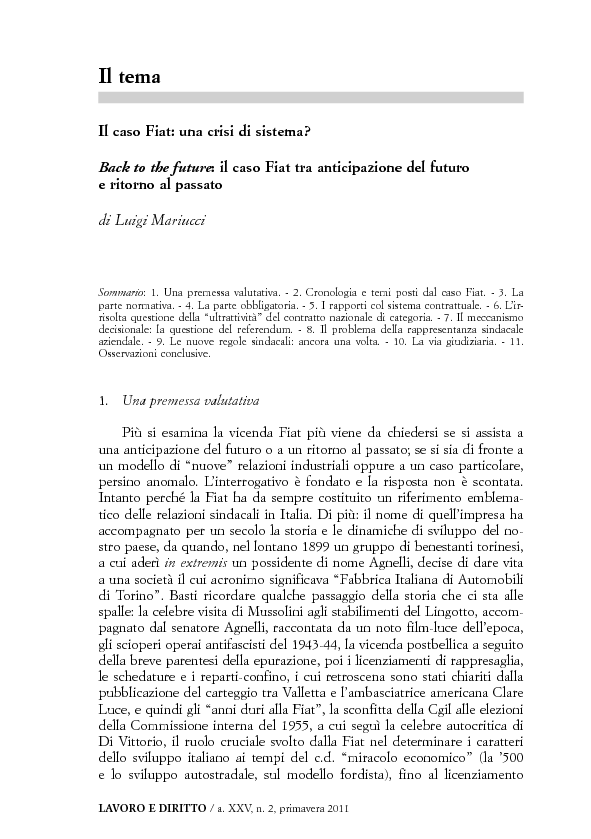