Keywords: contracting out; joint and several liability; safety at work

The essay analyzes the numerous innovations concerning work in the context of contracting out that have been realised by legislation during almost two-years of centre-left government and specifically through: art. 35 of the decree n. 223/2006 (so called "Bersani" after the Minister of Economic Development who designed it), converted by Act n. 248/2006, in which a mechanism has been drawn coming into force only after the adoption of the ministerial decree n. 74/2008; art. 1, paragraphs 909-911, of the Budget Act n. 296/2006 for year 2007; Act n. 123/2007 about safety at work, containing also the delegation to the government for the issuing of a Consolidation Act on the subject and, last but not least, the legislative decree n. 81/2008 adopted as consequence of that delegation. According to the author, the considered innovations, that modify the legal regimes of both joint and several liability for employers' debts and obligations for safety at work, must be appreciated for the specific attention given to the increasingly diffused subcontracts and for the enforcement of the rights of contractor and subcontractor employees that they produce. Nevertheless these innovations are not quotable as examples of a good legislative technique and generate some interpretation problems to which the author tries to offer solutions. 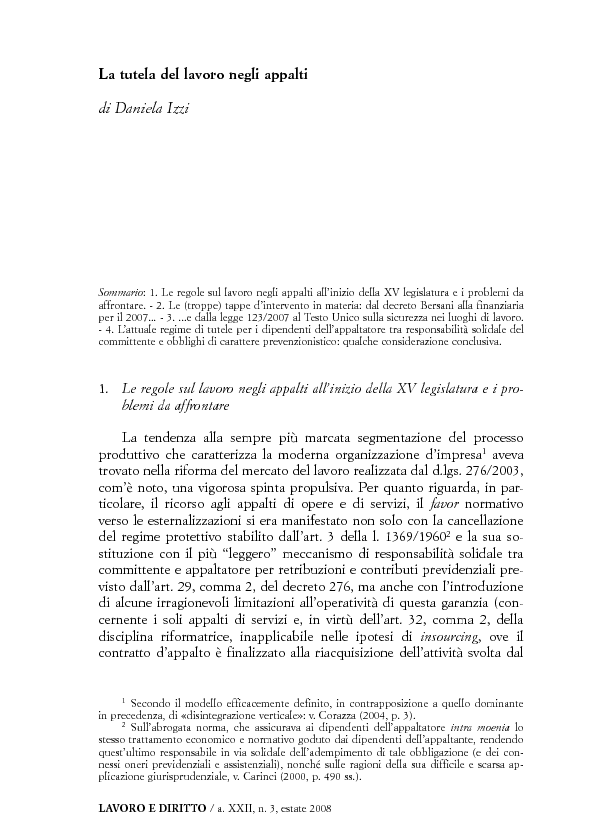